There are many incredible things to see for free

“Everything is nearly copacetic. I woke with a lot of ambition, but I’ve gotten over it. Cruella insists that I’m superficial, but that’s just on the surface. She needed to use my computer the other day. It’s an old one. It runs on kerosene. She asked me for my password. It was ‘PopeyePlutoBarneySpidermanShaggyBatmanGoofySupermanMinneapolis.’ Cruella asked why I had such a long password, I told her that when Weasel hooked the contraption up for me, he told me that my password should be at least eight characters long and include one capital. Still Bill and I were talking about our school days. He hates to sleep for fear that he might dream he was working. He has an enlarged procrastinate. Frank N. Stein was a bully in school. He spent either five years in the sixth grade or six years in the fifth grade. He was as big as a barn. He liked to pick on the younger kids. He could tease a boy to tears. In the second grade, I told Still Bill that when Frank bothered him, Still Bill should say, ‘Sticks and stones may break my bones, but words will never hurt me.’” 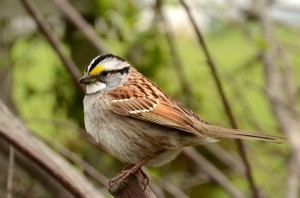 Photo of a white-throated sparrow by Darcy Sime of Alden.

I led a nature walk on Earth Day. It was time well spent. The day and the people were beautiful. Birds, butterflies and flowers entertained and enthralled. We watched a crow walk through the grass as if it were searching for a lost item. There were so many incredible things to be seen free for the looking. I was reminded of the wonderful old song, “The moon belongs to everyone. The best things in life are free. The stars belong to everyone. They gleam there for you and me. The flowers in spring. The robins that sing. The sunbeams that shine. They’re yours, they’re mine.”

Earth Day is a reminder — one of at least 365 a year — that we need to respect all things. I picked up garbage tossed from cars. The fight continues for a clean environment. As Pogo from the funny papers said so wisely, “We have met the enemy and he is us.” We are an invasive species. We need to be on our best behavior.

On my drive home, I saw a woodpecker hammering on the side of a deserted home. To a woodpecker, a house is nothing more than a dead tree. Small tents in trees were conspicuous. Tents made by eastern tent caterpillars are found most often on the branches of crabapple, apple, cherry and plum trees. The caterpillars, with a distinctive white stripe down the back, are typically done feeding by mid-June, but the tents are visible until rain and wind demolish them. The best removal method is to scrape the caterpillars and tent into a bucket of soapy water in early evening after the caterpillars have returned to the tent. If the tent is out of reach, tear up the tent with a stick and spray the area with soapy water. Cutting the branches or burning the tents causes more damage than the caterpillars.

A caller reported a young great horned owl on the ground and worried about its safety. At about six weeks of age, an owlet often becomes a brancher — climbing onto a branch. The problem is that it’s not capable of effective flight until it is nine to 10 weeks old. A young owl often falls to the ground. The parents continue to feed a youngster on the ground. That was the case with the owlet in the caller’s yard. Research has found parents feeding a young owl for as long as 10 weeks after it leaves the nest and a youngster begging for food for as long as four months. The owlet’s begging includes an ear-piercing screech. Crows and raccoons may steal owl eggs and nestlings. Few predators, other than other great horned owls, attack a great horned owl. A coyote or fox could prey upon a young owl on the ground. A feral cat could attack a grounded owl weakened by bad health.

“There is a small, open hole with a mound of dirt by it at the edge of the marsh. What made it?” Your excavator sounds like a crayfish (crawdad). It builds an earthen mound of castings called a chimney.

“Can birds smell?” All birds react to smell. Some better than others. Turkey vultures, storm petrels, albatrosses and kiwi are some of the species at the top of the smelling class. I suspect that a great horned owl that eats skunks might be at the bottom. Robins are believed to be able to smell worms, goslings use their olfactory sense to find food, and the starling employs a sense of smell to find aromatic green nesting material. Even with the ability to detect odors, a mother bird will accept a baby back after it has been touched by a human. She’s a mother, after all.

Birding on The Andy Griffith Show

Gomer Pyle: “Hey, Barn, don’tcha think we ought to make up some animal noises in case we get separated? I could be an owl and go, ‘Hoo! Hoo!,’ and you go, ‘Chick-a-chee, chick-a-chee,’ like a squirrel. That way, I’d know it’s you.”

“A man begins cutting his wisdom teeth the first time he bites off more than he can chew.” — Herb Caen