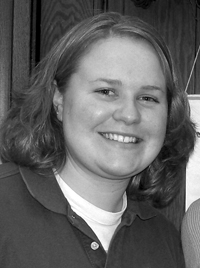 This activity was talked about on KATE Radio the week after National 4-H Week. Vestas, which is the wind turbine manufacturer, installer and service provider at the Bent Tree Wind Farm in Hartland, heard about our science experiment and contacted 4-H for more information.

In addition to being a partner to do another science day with 4-H in the spring/summer time, Vestas also sponsored a 4-H recycling contest. 4-Her’s and their clubs had an opportunity to create an idea that had to be submitted and reviewed. The winning ideas were presented with a monetary award for their efforts.

One of the ideas was a rain barrel, created by Ryan Hansen of the Alden 4-H Club. After being notified of winning this contest, Hansen brought this idea up to his club to see if there was a need for a community rain barrel in Alden. Because of the Extension Office being located in the courthouse and having other departments close by, Ryan’s idea was able to have rain barrels donated to the 4-H Program to be used in other communities around Freeborn County.

In addition to the rain barrel idea, the Hartland Club organized an idea that utilizes resources from the Freeborn County Environmental Services Office. They are working on logistics of having a recycling bin at the gas station in Hartland to deposit your plastics and cans into when you are getting gas and cleaning out your car.

Vestas was very instrumental in offering an incentive for 4-H clubs to create a recycling program in their local communities. When given a chance to make a difference, 4-Her’s go above and beyond to make those ideas work. These two ideas were just a sample of the ideas that were submitted to this contest.

Vestas began investing in clean in energy in Minnesota in 1998, by manufacturing three 660kW turbines for the Chandler Hills wind farm. Today, Vestas employees 80 Minnesotans to service wind turbines across the state. Vestas has installed more than 11,000 wind turbines in the U.S. and leads the industry with more than 46,000 worldwide.