Another fishing opener is in the books, and the weather couldn’t have been any better. This year’s opener was hosted by the community of Waconia which is located in the west Metro area. Lake Waconia itself is the second largest lake in the Twin Cities Metro area, second only to Lake Minnetonka.

When I first heard that the opener was being held in the Metro area I didn’t know what to expect. Once I arrived in the area and had a chance to talk to some of the local folks I realized that this was going to be another fun event. As each year’s opener approaches I find it hard to imagine that an area can top the previous years, but again this year I was 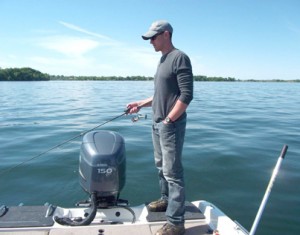 Charlie Christopherson of Saint Bonifacius was the fishing host for Dick Herfindahl and Jeff Anderson at the Governor’s Fishing Opener on Lake Waconia.

pleasantly surprised. The folks of Waconia went the extra mile, and they did an excellent job of showing the media and guests what their community is all about.

Hosting an event of that size takes a lot of work and it was estimated there were more than 300 volunteers working to make it all come together.

The hosting of a Governor’s Opener is the communities’ chance to promote their area and attract tourism. The economic reward garnered from this event is immense and tourism in all of Minnesota brings in an estimated $11.3 billion annually.

Lake Waconia itself is a scenic lake with some beautiful homes dotting the shoreline, but it also has plenty of open land that is lined with trees. The lake has 3,080 acres of water with a maximum depth of 37 feet. There is a large 37 acre island on the lake that is named Coney Island after the famous island out east. Coney Island in Lake Waconia is not only a unique piece of land, it has an interesting history.

The resort that once occupied the island was a destination for vacationers from the Twin Cities as well as from out of state. At one time, the University of Minnesota football team even held practices on the island. As in all places with a historic past, legend has it that there were also some well-known gangsters that frequented the island back in the day.

Lake Waconia is one of the finest fisheries in the metro area. It is known for its variety of species and beautiful scenery, which make it a destination for thousands of visitors. Anglers revel in the size of the walleye, muskies which get up to four and a half feet in length and bass.

Pan fishermen find a vast resource of sunfish and crappies. In addition, the lake has seen a rejuvenation of the northern pike population.

Whether you’re an angler who enjoys catching fish for the fry pan or to catch and release, you can find what you are looking for on beautiful Lake Waconia.

Friday night, I, along with my friend Jeff Anderson, a sports broadcaster from Watertown, S.D., who I have been fishing with for several years, met up with our fishing host at the community center. Charlie Christopherson was our host this year, and he was excited about the chance to show us the lake and talk about the community.

Charlie, 32, is married and has two daughters that are 8 and 5. When he talked about them his face would light up. On this day, however, he would have to put up with hanging out with a couple of old guys.

Charlie works in Eden Prairie and his wife in Chanhassen so they decided to relocate to the small community of Saint Bonifacius just outside of Waconia.

He likes to hunt as well as fish and is really into running. He has run in quite a few marathons. On this day, though, he was trying to put Jeff and I on some walleye. He kept on talking about the lake having some sheepshead in it and I think that this was an omen because I ended up catching the largest one that I had ever seen. It was a good fighter but not exactly the fish I had written down on my wish list.

We caught a lot of perch and I had a fish on that I couldn’t get to the boat and after a few minutes it spit the hook.

Most folks I talked to said that it was probably a muskie, which is an abundant fish in this lake.

Charlie said that when he fishes Waconia it is primarily for bass and muskie. He said it is a very good bass lake and that there are not only a lot of muskie in the lake, but many fall in the lunker category. The lake has good structure which makes for good walleye fishing, and plenty of crappies and sunnies swim the waters.

One fisherman mentioned that he felt the sheepshead population was a big contributor to the rapid growth spurt of the muskies in the lake.

Although there are plenty of walleye in the lake we evidently were not in the right place at the right time. The days leading up to the opener were cool, cloudy and rainy, but Saturday was a perfect day weather-wise. A sunny, warm day with little or no breeze does not always make for a good fishing day for walleye.

There were walleye caught on this day but none were taken by our group of fishermen. The largest registered that day was a 28 1/2-inch fish and the largest pike registered was 33 1/2-inches.

I mentioned to Charlie while we were fishing that you could take this community and plunk it down anywhere in rural Minnesota and it would blend in. Waconia truly does have the best of both worlds, the beauty of country living and the friendly small town atmosphere with all the assets of the metro area. I will definitely visit Waconia again.

Until next time, set aside some vacation time and enjoy a little fishing; it’s the best way to enjoy the outdoors.