Memorial services for Wayne E. “Jack” Oothoudt will be at 2 p.m. Sunday at Bonnerup Funeral Service, Albert Lea. The Rev. Dwight Netzer will officiate. Visitation will be from noon until the time of the service at the funeral home on Sunday. Private interment will be in Graceland Cemetery with military honors by Albert Lea veterans organizations. 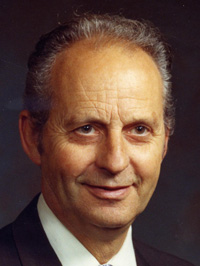 Wayne E. “Jack” Oothoudt was born on May 2, 1916, in Randall, the son of Hetzel and Nettie (Brown) Oothoudt. The family lived on a farm and Jack attended School in Staples, Granada, later graduating from Winnebago High School in 1934 in the top 10 in his class. He spent 18 months in the Civilian Conservation Corp where he met his future wife Alvina Wissbrod. They were married on Jan. 1, 1939. Jack and Alvina shared 72 years together before she died on Sept. 24, 2011.

Jack was in the grocery business until retirement in 1983. He managed stores owned by C. Thomas and National Tea Co.

In 1944, they bought Malmers Super Valu in Albert Lea. Soon after, Jack was drafted into the Army and spent two years in the Army infantry. He was discharged with the rank of sergeant. On return from the army, Jack and his partner Boyd deMalignon started Boyd and Jack’s Super Valu. This store was destroyed by fire in 1964, and reopened in June of 1965. Boyd died in June of 1965.

Jack’s family consisted of his wife Alvina (Wissbrod) Oothoudt, a son Jerry Wayne was born in 1942, a life long anthropologist and artist in Reno, Nev. A son Robert Jon was born in 1948, a resident of Albert Lea and a partner with Jack in the grocery business for 14 years.

Jack was especially proud of the fact that he was an Eagle Scout, a Presbyterian Elder and an infantry sergeant in World War II. He was a member of the Lion’s Club, the VFW, the American Legion, the Elks, the Golden Kiwanis I, the Masonic Lodge and the Shrine Club. He had served on the board of directors of the First National Bank, and had been president of the Albert Lea Country Club. Jack loved to golf and fish, spending a week each June on God’s Lake in Canada, a most appropriate place to fish. He also enjoyed writing poems.

He was preceded in death by his parents; his wife Alvina; his son Jerry; and 10 siblings.