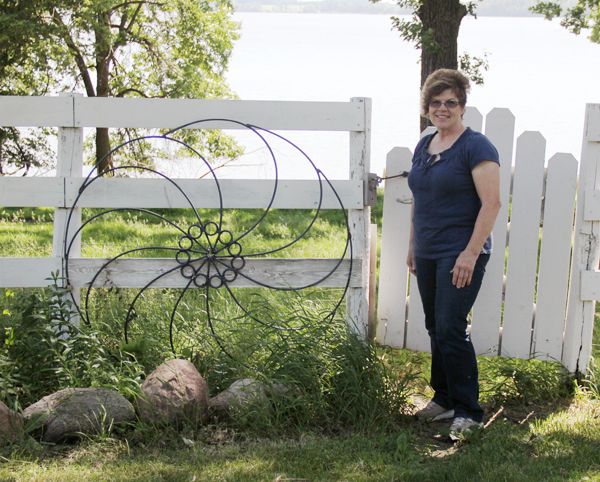 Gloria Jorgenson poses for a photo at her farm near Freeborn Lake, which is in the background of the photo. Jorgenson’s farm was recently named a Sesquicentennial Farm by the Minnesota Farm Bureau. -- Kelli Lageson/Albert Lea Tribune

ALDEN — One of the oldest farms in Carlston Township was recently named a Sesquicentennial Farm by the Minnesota Farm Bureau.

The farm, at 26504 640th Ave. about six miles north of Alden, is owned by Rick and Gloria Jorgenson. Gloria’s maiden name was Melandar, the name for which the farm is most known. She grew up on the farm with her parents, Henry and Dora. Only three generations have lived on the farm in its 150 years. 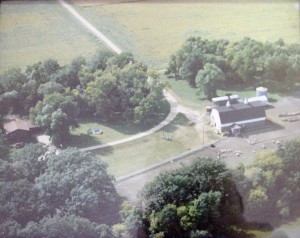 Shown is an aerial photo of the Jorgenson farm on Freeborn Lake. The farm is 150 years old this year and has been in the same family’s hands the entire time. -- Submitted

But she never knew her grandfather, John L. Melander, who first settled the farm. She has done some research on her family, and Melander’s obituary tells much of the story. She also has Melander’s diaries, which she had to have a friend transcribe since they’re written in Swedish. Some of the writing is unintelligible because the language has changed.

He was born in 1825 in Sweden and served in the German army before marrying his first wife Hanna. They traveled to the U.S. in 1854 and lived on the East Coast and elsewhere in Minnesota before settling at the farm in 1862. Minnesota had only been a state for four years. That was 150 years ago, and because the farm has never changed families it was named a Sesquicentennial Farm.

Melander also owned a blacksmith shop in Albert Lea on Clark Street starting in 1866. After his first wife died, he married Ellen Nelson and had three sons, one of which was Jorgenson’s father, Henry, born in 1886.

Jorgenson said she thinks it’s unique that only her family members have lived on the farm since it started, and she’s enjoyed living on the homestead that’s situated on Freeborn Lake.

Jorgenson, who has no living siblings after her brother passed, inherited the farm when her mother died in 2001. She and Rick have three adult children: Traci Toulouse, Erick Jorgenson and Mindy Carlson. They each have careers and homes elsewhere, but Jorgenson said she hopes one day one of them might want to live at the farm to keep it in the family.

“They like coming home here to the lake, and I guess my hope would be they hang on to it,” Jorgenson said.

Jorgenson said while they did farm the land for a while, now they rent it out. They do still raise sheep, which helped them qualify. The farmstead is 200 acres, with 150 of it farmland.

Not only was it one of the first in Carlston Township, it has seen other history as well. A well-known schoolhouse used to sit near its driveway. That schoolhouse is now preserved and sitting in Freeborn — many know it as the Melander School. Jorgenson’s grandfather had donated land for the school, named District 15 by the state. It’s now a museum maintained by the Freeborn Area Historical Society.