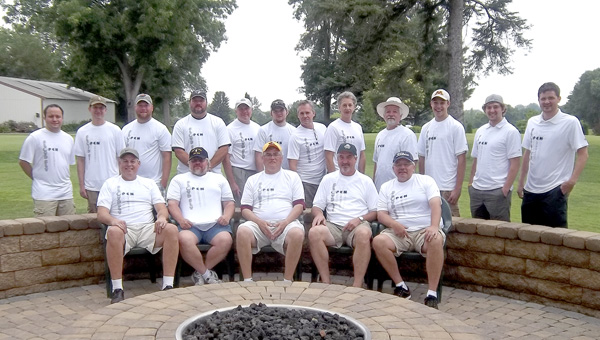 What started as a guys day out before Gary Dunn got married has turned into an annual event for Albert Lea High School graduates.

Over the last 30 years, the Floyd Fly Open golf event has been a chance for guys who graduated in 1974, 1975 and 1976 to reunite the Saturday before Father’s Day and play a round of golf.

The event was named after Dunn who was nicknamed Floyd after his father. The second part of the name came from a supposed zipper mishap after the very first golf outing.

“It’s a claim that I mildly dispute,” Dunn said. “But, that’s how legends are born. The Floyd Fly Open is a bad pun, but is one that has stuck for three decades.”

The open has been an informal golf event that has been played at area golf courses with the exception of one year when the guys took a road trip to Des Moines.

Dunn said many of the years the open has been played at Green Lea Golf Course. Dunn said it works out well because Jeff and Denise Elseth have been very accommodating hosts and graduated with many of the guys who play.

Dunn said originally there were only five guys, but now has expanded to include more.

“Some years we have had as few as nine players and others as many as 21,” Dunn said.

As the group members grew older and started getting married and having families of their own, the event started to include spouses.

Dunn said now it is back to a stag event, but the sons of some players have joined in.

“It’s a fun thing for the younger generations to see a group of friends whose relationship is so valued,” Dunn said.

He said it’s something that all of the guys look forward to and the group welcomes any other men who want to join in.

“It’s such a great opportunity,” Dunn said. “Everybody knows when it’s going to be and that we’re going to get together and laugh and harass each other.”

Dunn said at the end of the day the scorecards are added up and trophies are awarded.

“There have been very elaborate trophies all the way down to a beer can with the No. 1 written on it,” Dunn said.

Dunn said everyone throws money in a pot to help pay for the trophies and prizes. The only catch is whoever wins has to plan the next year’s event.