Funeral services for Arline C. Smith, of Albert Lea, will be at 1:30 p.m. Friday at Bonnerup Funeral Service, Albert Lea. The Rev. Vern Harris will officiate. Interment will be in Hillcrest Cemetery. Friends may visit with family one hour before services at the funeral home. 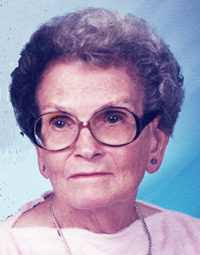 Her family moved to Albert Lea when she was 8 years old. She graduated from Albert Lea High School in 1935. Following graduation she was employed at Wilson & Co. and worked in the office for six years, where she met her husband Jack Smith, a high school class mate. Jack and Arline were married on June 10, 1941. In the spring of 1943, Jack was stationed at Bradley Field at Suffield Connecticut for 10 months and Arline was able to join him there before he was transferred overseas. Arline then returned to Albert Lea and worked for American Gas for four years.

After Jack returned from World War II, two daughters were born to them and Arline did custom sewing in her home while raising the girls.

In 1959 she returned to full time office work at Universal Milking Machine Co. working in accounts payable. Prior to her retirement, she and Jack took a trip to Hawaii and then retired on the same day in 1978. In their early retirement they spent three months in California during winter, at four separate times.

Arline enjoyed many hobbies including golf, sewing, knitting, crocheting, counted cross stitch, reading and quilting projects. She shared her crafts and handiwork with many friends and family. Jack and Arline were active members of the Albert Lea Church of Christ for many years.

Arline was preceded in death by her parents; husband; sister Eva Christiansen; infant sister Dorothy Campbell; and many brothers and sisters-in-law.

Arline was a wonderful wife, mother, grandmother, and great-grandmother whose God given talents and love will be greatly missed.