Beyond the Flames: Fighting fires 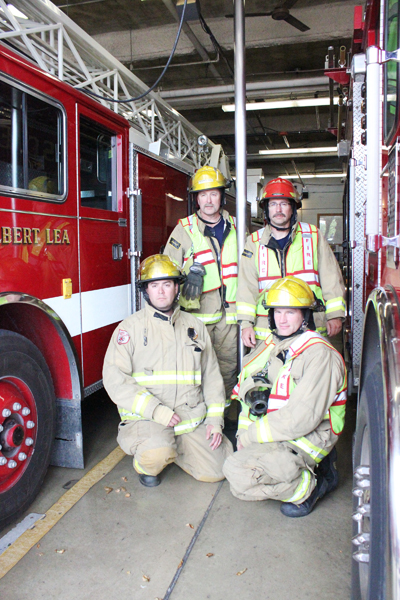 Editor’s note: This is the sixth in a six-part series looking at the duties of the Albert Lea Fire Department.

In the middle of a meeting at the Albert Lea Economic Development Agency, Dorman, who works as the executive director, received a call on his cellphone. He said he didn’t think much of it at first, but then he received another call. And another.

He knew something wasn’t right.

“I thought at first it was something with my parents,” he said. “But then they told me to get down to the store.”

A fire, at 505 E. Main St., had damaged the six main service bays at the company and filled the front office and showroom with smoke. The fire was caused by a droplight that fell, sparked and ignited the gas from a fuel pump being changed in the garage.

Only a few blocks away, firefighters with the Albert Lea Fire Department arrived in less than two minutes.

Dorman said because firefighters were able to respond so quickly, the blaze was able to be contained to the garage.

A report released earlier this month by consultant firm Almont Associates states firefighters can respond to the core center of the city within four minutes and to the entire city within eight minutes.

This is one figure city officials are looking at as they examine the responsibilities of the firefighters and look at whether there should be changes in the department.

Officials are also looking at what should be done with the existing fire department and who should lead the force. The evaluation comes as the city is dealing with tight budget times with the loss of state funding and other revenue.

In 1991, Austin reduced its full-time force through a plan of attrition, which took until 2000, according to the report.

Austin Fire Chief Mickey Healey said the department has nine full-time firefighters and one full-time chief. Three people are on duty at any given time.

That is in comparison to Albert Lea’s department, which is made up of 16 full-time positions, including one chief, four captains and 11 firefighters. Five people are on per shift with a minimum of four people responding. Albert Lea also utilizes the Albert Lea Township Fire Department, which has paid, on-call staff.

According to the report, Albert Lea and Austin firefighters responded to a similar amount of fire calls during the last five years; however, the significant difference that was discovered was the fire loss in the same time period.

Healey said he thinks much of it has to do with OSHA standards, which require there to be at least four firefighters on the scene of any given fire before firefighters can go inside to battle a blaze. Otherwise, they have to remain outside.

Healey said this rule makes it difficult for his department since there are usually only three people on duty. The full-time firefighters must wait until the on-call firefighters arrive to move inside.

“On average, we are delayed at attacking an interior fire,” he said.

Healey noted sometimes it can take an additional six to 10 minutes for the crew of on-call firefighters to arrive.

The report stated, “While it is difficult to place a solid correlation between the two, there is evidence that the quick response, with a crew capable of making rapid interior attack along with Albert Lea’s strong fire prevention program may make the difference between the two communities.”

Albert Lea Fire Capt. Mark Light said it is crucial to having four firefighters on duty to respond to a fire.

“If you can jump on something initially we may not be able to put it out, but we can at least knock it down,” Light said.

Healey said officials used to say that a fire doubles every minute but now it often doubles every 30 seconds because of changes in building materials. There are more synthetic materials — essentially plastics — being used, he said.

“It’s more important now to have good staffing and rapid response than it was 10 to 15 years ago,” he added.

‘Our hearts were racing’

Albert Lean Audree Wagner, of 415 Oregon St., has seen just how fast fires grow after a 19-acre grass fire started in the field behind her house April 9 on the south end of Albert Lea.

The fire started that morning in the field south of Oregon and West Seventh streets, east of Lincoln Avenue and north of West Ninth Street. The fire grew as the wind changed directions, ultimately threatening homes.

“Our hearts were racing because if it had been in the orchard they would have really had a time,” Wagner said.

She said she was pleased with the response of the local firefighters and of the other departments that responded.

“They did just a super job,” Wagner said. “I can’t say enough to them.”

In 2011, the Albert Lea Fire Department responded to 55 fire calls.

Albert Lea Fire Lt. Al Schallock and Capt. Lee DeVries said while there is a certain kind of excitement in fighting fires — and ultimately that is why they began fire service — there are also tough parts.

DeVries said early on in his career with a different department he and his fellow firefighters lost one of their own. He has also seen residents die from the fires he has fought.

“Those kinds of things are the dark side of the career, but it does help me to push on with it,” he said.

The men said fighting to prevent any injuries or deaths and to save property motivates them to succeed.

“If we can get to a fire and put it out, we can save lives and we can save property,” Schallock said.

Albert Lea City Manager Chad Adams and the Albert Lea City Council hope to have a decision made about the leadership of the department in about three weeks with a decision on the organizational structure in the next two to three months.

Adams said he hopes the decision can be made as the city is setting its preliminary 2013 budget levy in September.

According to Light, there are 661 rental housing properties in Albert Lea with 2,101 rental units. Firefighters conducted 1,105 inspections in 2011.

They conducted 110 commercial and industrial inspections and cited 253 violations, according to the Fire Department.

“It’s a lot of going out and educating and working with people,” Schallock said. “It’s educating them why we’re concerned about this or why this has to be enforced.”

Read the rest of the series: