Construction on the rise 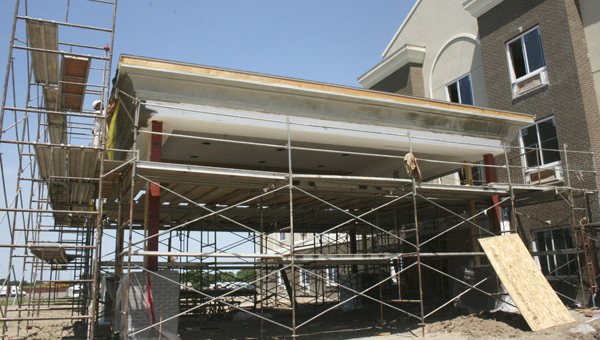 Work is under way on a new Holiday Inn Express next to Love’s Travel Stop off of East Main Street in Albert Lea. -- Sarah Stultz/Albert Lea Tribune

Albert Lea has almost doubled the value of its construction so far this year compared to this time in 2011, according to reports from Albert Lea’s Inspection Department. 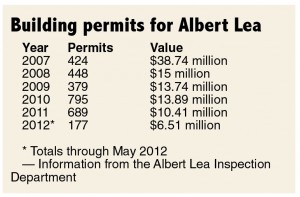 “I have a really good feeling we’ll be at our normal average or above,” said building inspector Doug Johnson.

Johnson said in years past, the city has averaged anywhere between $14 million and $20 million in annual construction valuation; however, because of the tough economy in the last few years that number has decreased.

“The so-called economy crush put us in a little bit of a tailspin last year, but I think that it was just kind of a blip,” he said.

Projects such as the Mrs. Gerry’s expansion, the construction of the new Holiday Inn Express, the Albert Lea School District’s remodeling, and the renovation of the former KATE Radio building have all contributed.

In addition, Johnson said he believes the housing market is starting to come up in Albert Lea.

Last year, with money tight, many people would repair or renovate their homes instead of buying new. He said many are continuing to do that this year as well, but some are coming into the city asking about building new as well.

According to inspection reports, there had  been one permit taken out through the end of May for a new home valued at $250,000, and 155 permits had been taken out for residential alterations, additions or repairs valuing almost $1.5 million.

According to the Southeast Minnesota Association of Realtors, there have been 75 homes sold in Albert Lea through the end of May.

Reports indicate 20 building permits have been filed through the end of May for commercial businesses, valued at almost $4.7 million.

He said many times businesses are making upgrades on the insides of their buildings that are not visible from the exterior. 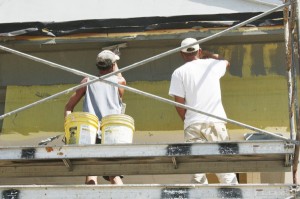 While Albert Lea has seen improvement thus far this year in its construction valuation, the figures are still far behind the value of the construction in the neighboring cities of Austin or Owatonna.

According to reports, in 2011 there were 689 building permits filed in Albert Lea with a valuation of $10.4 million.

For Austin that included an addition and campus upgrades to Mayo Clinic Health System in Austin valued at about $30 million, school improvements and a new Anderson Construction office building.

The Mower County Jail and Justice Center, which cost $28 million, was completed in the fall of 2010.

There is also a $3 million early childhood education center that is slated to be constructed at the Riverland Community College campus in Austin.

Between all of the projects, Hoium said Austin is looking at anywhere between 320 and 340 new jobs, including positions for doctors, scientists, teachers and support staff.

“That should be a huge boost to our economy,” he said. “It’s just a very positive thing for the community.”

Hoium said Austin has held strong through the weakened economy, with a significant amount of commercial development in the last four to five years.

He estimated the lowest construction year was at about $24 million.