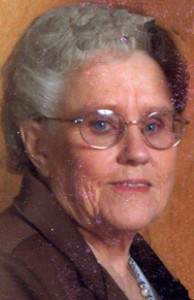 Edna developed kidney disease and had been on dialysis since June of 1998. She died peacefully on Saturday morning, June 2, 2012, at Thorne Crest Retirement Community – Health Care Wing. Edna was born on Jan. 15, 1933, in Albert Lea, the daughter of Earl and Anna Bertha (Schoon) DeRaad. She married LeRoy Schocker on May 17, 1980. Edna had worked at Land O’ Lakes and Hudson Foods for 33 years retiring on Jan. 3, 1997. She enjoyed bowling and golf for which she received many trophies. She also liked fishing and reading. She loved her three poodles Missy, Charlie and Cuddles.