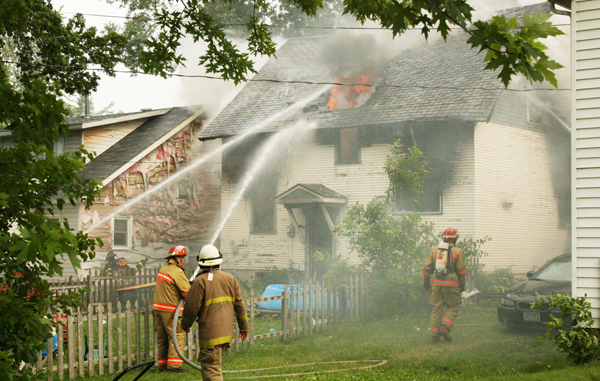 ELLENDALE — A mother and her four children are without a home after a fire badly damaged their house Thursday morning.

Chanelle McCamish and two of her children were able to escape safely from the house at 403 Fourth Ave. W., according to initial reports. Her other two children were at their grandmother’s house.

Craig Vudenske, a family friend, said McCamish’s oldest daughter, Whitney, was the first to come out of the fire. She reportedly went back to the house and saved her 3-year-old brother Blake and her mother.

Whitney was reportedly treated and released from a local hospital for smoke inhalation, Vudenske said.

One Ellendale firefighter also was reportedly transported to the emergency room after complaining of chest pain. His condition Thursday afternoon was unknown.

Neighbor Stephanie Kibler, who lives across the street from the McCamish family, said when she first came outside to see what was going on there was just smoke coming out of the door.

“Within a few minutes there were flames, then

all of a sudden everything went,” Kibler said. “It took minutes for that to fly up.”

The fire, reported to dispatchers at 8:33 a.m., remains under investigation by the State Fire Marshal’s Office and the Steele County Sheriff’s Office. The blaze was fought by firefighters from Ellendale, Geneva, New Richland and Owatonna. Blooming Prairie ambulance crews also assisted.

The house was fully engulfed when firefighters arrived.

The street in front of the house was filled with dark smoke as firefighters worked to gain control of the fire. Firefighters were on scene for more than four hours.

At least half of the firefighters were called out after 11 a.m. to battle a fire in Geneva.

As firefighters worked to douse the blaze, at least three or four dozen people nearby watched.

Jeff Torp, who lives about a block north of the McCamish family, said his wife saw smoke, and he headed over to make sure everyone was OK.

Jeff Kunkel, who lives directly west of McCamish at 405 Fourth Ave., said he was at work at Lowe’s in Owatonna when he got a phone call from a Steele County dispatcher. His wife, Patty, had left for work at Mills Fleet Farm about 10 minutes before the fire was reported.

He said at first he thought the dispatcher was calling to tell him that something had happened to his wife, who has had health problems in the last year, but then he found out that the house next door had caught on fire and that his house had also been damaged. The siding, which had just been installed in the spring, melted off.

Though he was disappointed the siding was melted, he said he was grateful his house was still standing and wasn’t damaged worse.

Geneva Fire Chief Greg Bartsch said if the wind had not been straight out of the south or had been calm, a neighboring structure would have been more likely to catch on fire.

Firefighters worked to make sure the former Ellendale United Methodist Church was not damaged on the east side of the McCamish house, on the corner of Fourth Avenue and Fourth Street.

This is the third fire on the same street within the last two years and the fourth fire within two or three blocks, according to neighbors.

“I know what she’s going through,” said Rachel Schmidt, who had to gut her house after she had a small fire in January of 2010.

According to neighbors, the house was owned by McCamish’s mother, Donna Mae McCamish.