Enderes Tool down, not out 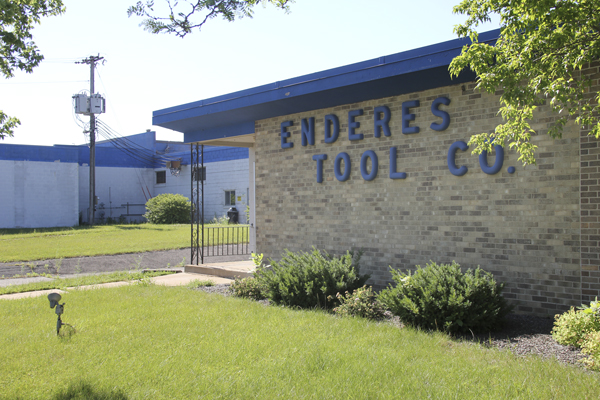 Enderes Tool Co. is at 924 E. 14th St. in the Jobs Industrial Park. The location is the farthest east building on 14th Street. The building was built in 1966, but the company was founded in 1910, with roots going back to 1896. -- Tim Engstrom/Albert Lea Tribune

Enderes Tool Co., an Albert Lea manufacturer with more than a century of local history, isn’t out of business. It still exists on paper. It still has a website.

But its future hinges on a gauntlet of financial issues.

The IRS has two liens on the company, one for $351,159 and another for $44,758. The company also owes property taxes: $98,147 on the parcel with its manufacturing plant on it and $17,249 on an adjacent bare parcel. The properties are scheduled for a forfeiture auction coming Aug. 9.

Steve Overgaard, owner of Albert Lea-based Vasco Inc., said Enderes retains a reputation for quality. He would like to purchase the building and put the workers back to work. He said he has been trying to buy the business for four months. He has been in touch with Enderes CEO Todd Dahl.

Dahl couldn’t be reached for this story.

Overgaard said he has been waiting on a bank, in addition to waiting on the IRS, and trying to make them work together. He said the more time goes by without a purchase, the harder it will be to get the sales rolling again.

Overgaard said the building and the tool-making equipment inside the building are made to go together, but the bank and IRS treat them separately. If he buys the building but isn’t able to own the equipment, then he doesn’t want the building.

He said while there has been much blame assigned over how the company faltered, “Really what started it all is this foreign competition. Good or bad, free trade has reduced consumer costs. Ultimately, it affects local businesses like Enderes Tool Co.”

Dale Elvebak is the former plant manager. He said he thinks reopening under a new owner such as Overgaard is a possibility, but, again, the longer the wait, the harder it is to retain customers.

He said the name has recognition but noted there are many aggressive people in the tools market.

Elvebak couldn’t speak to the company’s cash flow problems but did say he is hoping for the best for the sake of the workers and for him and his family.

Former employee John Severtson said six or seven years ago Enderes had about 50 workers. He said there were 12 workers when he retired from Enderes two years ago. He said when the plant closed April 27, there were six.

“They weren’t investing back in the company,” he said. “And it was hard to compete with imports.”

Severtson, the union steward for several years, said over time the company fell behind on bills and taxes.

The workers belong to Local 6803 of United Steelworkers. According to emails sent between workers, some were surprised to find their health insurance had been dropped as of March 1. Some had medical bills that weren’t covered.

The company sold its headquarters in Apple Valley about a year ago, Severtson said. Shipping was moved to Albert Lea, with the sales and administration offices moved to Savage.

“It’s kind of a bad deal that it is in such bad shape,” said Severtson, a former City Council member who now is a candidate for mayor. “It’s been in business a hundred-some years.”

The company was founded as result of a merger in 1910 between Albert Lea Machinery Co., which was started in 1908 in Albert Lea by Joe Pihl, and Enderes Manufacturing Co., started in 1896 in Littleport, Iowa, and owned by Ernst Enderes.

They made three tools at first, a cutting nipper, a staple puller and a chisel.

The company’s original plant burned down in 1966, and Enderes built its building in the Jobs Industrial Park that same year.

Dan Dorman, the executive director of the Albert Lea Economic Development Agency, said it is a disappointment whenever jobs are lost, especially manufacturing jobs.

“From a community standpoint, there wasn’t a lot you could do to prevent this.”

He said the Albert Lea Port Authority will look at what role it could step into to assist in keeping the manufacturer in existence.