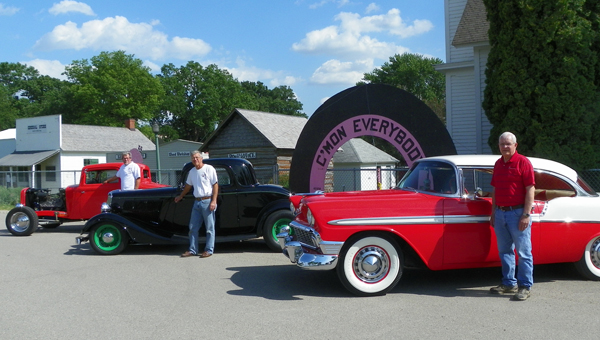 They started when they were young boys by working on bicycles and as they aged they began building and fixing cars. 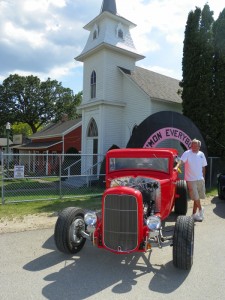 Dave Skogheim stands next to his car, which is made up of a 1932 Plymouth body and a 1934 V-8 flathead Ford engine and frame.

Dave Skogheim, Bob Olson and Jon Paske have been restoring and collecting cars since before they had driver’s licenses.

“It all started with fixing bikes,” Paske said. “Once we got our driver’s licenses we couldn’t wait to move up.” 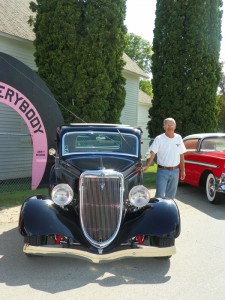 This year in the Eddie Cochran car cruise, Olson drove a 1956 Chevrolet, Paske drove a 1934 Ford and Skogheim drove what he calls a 1932 Plymouth-Ford. Skogheim’s car is made up of a 1932 Plymouth body with a 1934 V-8 flathead Ford engine and frame.

“Mine’s a junkyard special,” Skogheim said with a chuckle.

Skogheim, Olson and Paske all graduated from Albert Lea High School, but Olson is a few years older than Skogheim and Paske. They all knew each other, but each class had their own groups when they were in high school. The younger students did not mix much with the older students.

“When we were growing up the bicycle was a form of transportation and independence,” Olson said.

“When Bob was driving on Broadway, me and Dave were on bicycles,” Paske said with a smile.

Growing up during the 1950s and 1960s, Broadway was where all of the street rods were, Skogheim said. Broadway attracted the entire town because it was home to two theaters and six to eight restaurants.

“It was so jammed with traffic that it took 15 minutes to get from Fountain Street to Front Street,” Skogheim said. “Everybody wanted to be where the action was.” 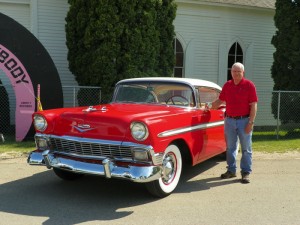 Bob Olson stands near his 1956 Chevrolet.

As time went by, memories with their cars were built and behind the memories are stories for why they drive the models they do.

When Olson was 19 years old he bought a brand new car just like the one he drives now. The only difference between that car and the one he has now is that it was dust plum colored. He has had his current car for nine years, and it was in good condition when he purchased it.

“This car has a place in my heart,” Olson said.

Olson owns two other old cars besides his 1956 Chevrolet, and he alternates which car he takes in a car cruise. He owns a two-door 1955 Chevrolet Bel Air and a 1932 Ford Roadster. He spent three years building the Roadster from scratch.

Skogheim bought his car from Olson in 1958. After getting out of the Navy in 1964 he began building it. Two years later he built the engine and it ran until 1972, but then he tore it down to refurbish it. In 1991 it was up and running and has been on the road since. Today this is the only car Skogheim drives.

“My brother-in-law influenced me to get this car,” Skogheim said.

Paske owned a 1962 Corvette and a 1963 Corvette, but sold them due to lack of storage space. He built a 1939 Ford which was a clone to his friend, Penny Nelson’s car. Nelson owned Turk’s Conoco and was always working on cars there.

Before car cruises, all of the old car owners would get together with their cars.

Most of the fun was in building them, Olson said.

Today, Paske, Skogheim and Olson take their cars to car cruises and enjoy the memories and friends they have made from participating in cruises.

“We are all at the age where we want to enjoy our cars as much as we can,” Paske said.