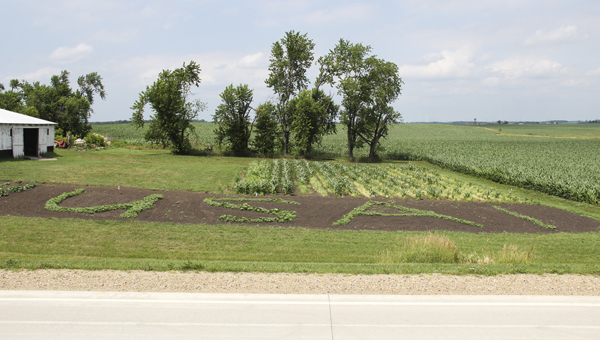 A garden at the Charlie and Linda Schmidt farm along Freeborn County Road 46 spells out “USA” with squash and pumpkin plants. -- Tim Engstrom/Albert Lea Tribune

ARMSTRONG — Motorists on Freeborn County Road 46 see a patriotic display whenever they pass a farm on the north side of the road about a mile west of the Armstrong corner.

Linda and Charlie Schmidt have planted squash and pumpkins to spell out “USA” in their garden near the road.

She said the display won’t last because the four plants, all members of gourd family, will grow vines and spread out.

She said she and Charlie have planted vine plants in arrays there before. They didn’t last year, but the prior years they did an X or a circle.

She said she told Charlie, “Wouldn’t it be fun to spell something or do a smiley face?”

Charlie agreed. Being a patriotic American and a former Marine, he went with “USA.”

“It seems fitting with the Fourth of July coming up,” Linda said.