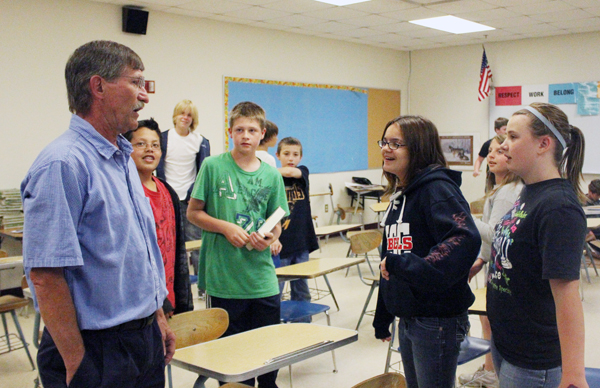 ALDEN — After 33 years of teaching first-, third-, fifth- and sixth-graders, an Alden-Conger School teacher is retiring.

Gary Nelson has taught at the school in Alden for all of those years, and he’s also never taken a sick day. He’s missed school before for other events like the births of his children, but he’s never called in to say he was too sick to work.

“I must just be a glutton for punishment,” Nelson said with a laugh.

He’s taught different grades throughout the years, but always elementary. One of the biggest differences in teaching different grades is the language. Nelson said he had to change the way he communicated when teaching first-graders, but with sixth-graders he could speak to them like they were adults.

“They catch humor, too,” Nelson said.

Though he’s ready to retire he said he’ll miss the kids — especially the ones with a desire to learn. Nelson said he’d especially miss the other teachers and staff at the school.

“That’s one of the good things about a small school – the camaraderie,” Nelson said.

One of his favorite things about teaching is that moment when an idea just clicks with a child. Nelson said he enjoys teaching math the most and likes to show children different ways of using mental math.

Many of his sixth-grade students don’t use calculators because it slows them down, Nelson said.

One thing he’s not retiring from is coaching, which he’s been doing for 13 years. He coaches wrestling, football and softball. He fondly remembers taking the football team to state twice, the softball team to state once and many individual athletes as well.

He’s seen many changes throughout the years including the school going from a three-story building to the current one-story building. He’s taught under five different superintendents and at least that many principals. The current principal, Brian Shanks, said Nelson will be hard to replace.

“I’ve only known him this school year, but I know he’s a dedicated teacher and coach who cares about his students,” Shanks said.

Nelson’s retirement started today with a fishing trip with his father. He said he also plans to go up with his family to their cabin at Breezy Point this summer. His wife, Lori, is also a teacher, but she teaches special education in the Albert Lea School District.

Since he’s worked every day from the time he was 10 years old, Nelson said he’s not quite sure what he’ll do in his retirement. He does plan to substitute teach, se he won’t be missing out on educating more youngsters.