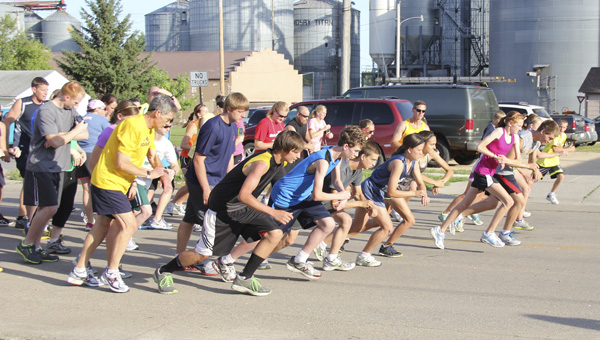 KIESTER — Heading south on Minnesota Highway 22, motorists enter a town with a population of 500. And this weekend, they discovered a town buzzing with activity. 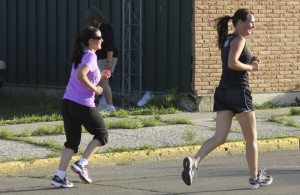 Two women smile Friday as onlookers tell them how many laps they had to run. The route of the Kiester Days 5K Run/Walk didn't venture out of the town and was completely on city streets. -- Colleen Thompson/Albert Lea Tribune

It was Kiester Days.

On Friday evening, there was a car show displaying classic automobiles and modern favorites. At the other end of town was cow chip bingo, where a bingo is determined by cow pies. And at the intersection of State and Fifth Street, was the Kiester Days 5K Run/Walk, an event held in honor of the late Lori Schumann. 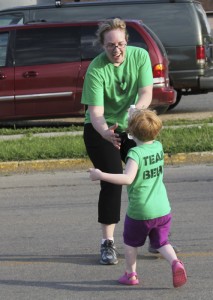 A daughter rushes out to meet her mother at the finish line of the Kiester Days 5K Run/Walk on Friday. --Colleen Thompson/Albert Lea Tribune

At 7 p.m. Friday, about 100 people lined up outside the American Legion Hall to either run, walk, skate or bicycle just over three miles in honor of Schumann, a Kiester resident who was diagnosed with cancer on May 21, 2008, succumbed to cancer two years later.

Kiester For A Cure began shortly after in 2009. Together they create fundraisers for the local scholarship fund for college-bound United South Central High School graduates. The 5-kilometer event and a November soup supper are some of those fundraisers. 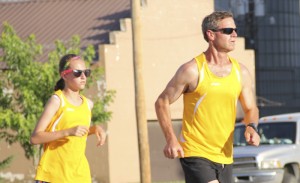 A pair of yellow-clad runners cross the finish line together Friday at a 5-kilometer run held as part of Kiester Days. -- Colleen Thompson/Albert Lea Tribune

KFAC is made up of Rachel Lohberger, Karen Zabel, Linda Willaby, Sheila Chose and Jodi Willaby.

Schumann lost her battle to cancer on Nov. 21, 2010. KFAC started this particular 5K run/walk in 2011 in her honor. They had 63 participants the first year, most of which were walkers. 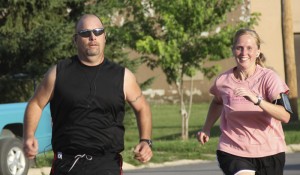 Each participant paid $15 to enter. The runners, made up mostly of teenagers, started at the front, while the bicyclists, in-line skaters and walkers took the back. The participants were mostly Kiester residents, but others from the surrounding towns came out to support. Schumann’s children, Tony and Lacey Schumann, also participated, along with their spouses and children.

“Lori was my friend, and I’m glad to walk for her,” said Diane Heaney, a Kiester resident and choral director at Albert Lea High School.

Fans and family members set up lawn chairs along the streets and in yards to cheer on the racers. Linda Willaby started the race with a “Go!” shouted into the megaphone. 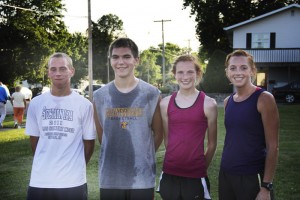 With the mercury at about 75 degrees, the race started with its participants running down State Street. The course included two laps around town, each one being a little over 1 1/2 miles. The first place finisher, Dylan Baumann, completed the first lap in just under 8 minutes. He completed the race with a time of 16 minutes, 15 seconds. Coming in second overall, was Lucas Malimanek of Albert Lea at 16:48. Placing first for the girls, was Emily Mantor at 17:18 with the second place female finisher, Lana Bauer, coming in at 19:22.

Finishers received a bottle of water and a warm welcome from the crowd after they crossed the finish line. The last walker crossed the line in just under an hour. 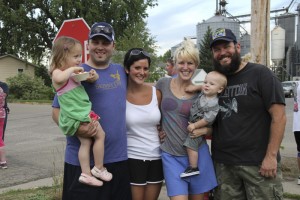