Motorcyclist flown to hospital after crash 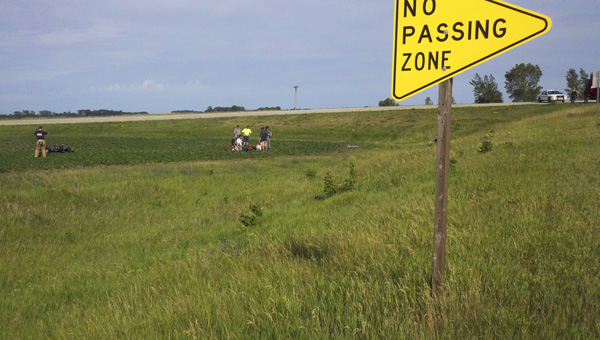 Worth County sheriff's deputies on Sunday inspect the motorcycle and the field in which it landed. The crash happened on the curve of U.S. Highway 65 just north of the viaduct north of Northwood, Iowa. -- Tim Engstrom/Albert Lea Tribune

The man’s name has not been released.

According to the Worth County Sheriff’s Office, the motorcyclist was driving northbound on U.S. Highway 65 when he lost control by Olive Avenue just north of the viaduct over the Union Pacific Railroad.

He reportedly struck two road signs, drove into the ditch and rolled into a field. The man, who was not wearing a helmet, was flung from the motorcycle.

Authorities were notified about the crash at 5:06 p.m. after dispatchers received a 911 call.

A Mercy Air Life helicopter transported the man to the Mason City, Iowa, hospital.
The Sheriff’s Office did not give any further information on his injuries.

The wrecked motorcycle remained in the farm field as investigators pieced together evidence of what exactly happened. About five automobiles were parked at the rest area north of the viaduct, with drivers and passengers watching the helicopter and other first responders. Assisting at the crash scene were the Northwood Police Department, Northwood Fire and Rescue and Mason City ambulance.