New coach and program in town 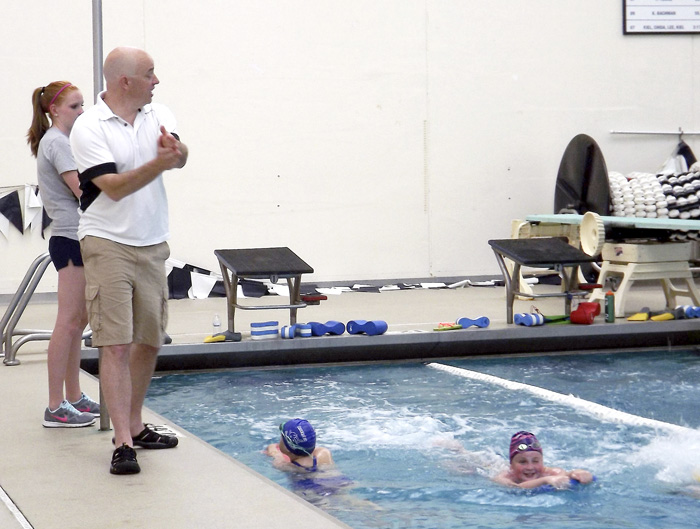 Mark Vininski has been coaching swimming since he was in ninth grade. Stepping up to coach at the Fairbault YMCA when there were no other coaches willing to, Vininski got a head start on his career.

Vininski and Schmitz swam together in college. They decided to start the program for swimmers to continue training in the summer, specifically Lindsey Horejsi, a 14-year-old swimmer from Albert Lea. Horejsi competed in the Olympic swimming trials Tuesday and Wednesday in Nebraska.

Until this year the Atlantis Swimming Federation was called the Fairbault Stingrays. Because more swimmers from different cities were joining, the team Vininski decided to change the name.

The Atlantis Federation is a USA Swimming team.

USA Swimming is an organization that trains swimmers for the Olympic team. According to the USA Swimming website there are more than 2,800 member clubs across the country.

When Vininski coaches his younger swimmers, he keeps fundamentals in mind. Knowing basic swimming strokes and skills will help the young swimmers when they compete on the high school team.

“When they figure it out, the smile on their face is incredible,” Vininski said.

According to Andrew Kozelsky, a swimmer who started with the federation this summer, Vininski understands that all the swimmers are on different skill levels and knows how to coach them accordingly.

Kozelsky will be a senior this year and took last year off to focus on his studies. Vininski said that Kozelsky is competing this summer while working on getting back in shape for the fall.

Vininski is hopeful for the team’s future. The team participates in swim meets through USA Swimming. The Atlantis Swimming Federation has six meets remaining this summer.

Vininski started coaching right out of college in the Minneapolis and St. Paul area. While his family lived in Oregon, Vininski was involved with his son’s swim team and also was a coach.

Vininski swam Masters in Arizona until 2004 when he started coaching again and moved back to Fairbault in 2005.

Vininski and his family live in Fairbault. His children, Dakota, MacKenna and Ahnika are swimmers. MacKenna is a diver and Ahnika plays football when she’s not swimming.

James Vininski, Mark’s brother, is a special Olympian swimmer and their other two brothers are swimmers as well. In addition, Mark has three step-brothers, one of whom swims.