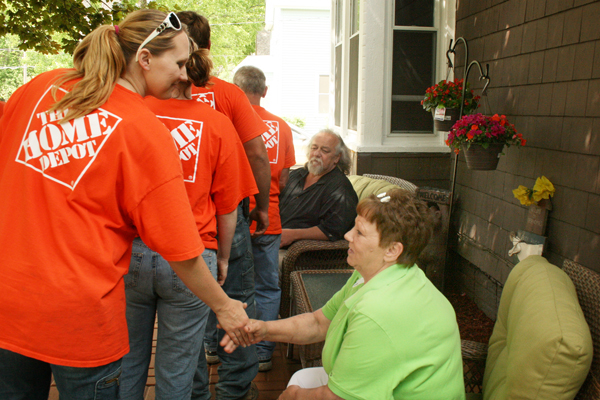 Home Depot volunteers congratulate Jackie and Gary Shuck Thursday afternoon at 911 Jefferson Ave. on their new patio and other renovations. The volunteers worked from about 8 a.m. to 3 p.m. to transform the front and side yards of the Shuck family. -- Sarah Stultz/Albert Lea Tribune

Sitting in their home Thursday, getting ready to start a new day, Gary and Jackie Shuck received an unexpected knock on their door.

Just moments before, at about 8 a.m., they watched as one pickup after another arrived in front of their home at 911 Jefferson Ave. and out jumped a series of people in orange T-shirts. 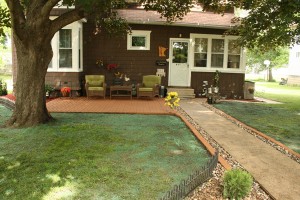 Improvements at the house, 911 Jefferson Ave., included a new patio, landscaping, painted window frames, a raised garden, among other amenities.

The people, volunteers from The Home Depot, announced they were there to give the Shucks a miniature home makeover.

Shocked and overwhelmed, the couple walked out of their home of 26 years and were quickly whisked away to breakfast as the volunteers began to work.

About a week and a half ago, Jackie suffered from a heart attack. She said the pain started off feeling like heartburn — so she didn’t think much of it — but then it got worse. She was ultimately flown to a hospital in Rochester.

Doctors are saying if she hadn’t gone into the hospital when she did, she could have died.

She is now off work for eight weeks. She works at the Kwik Trip on Front Street in Albert Lea. 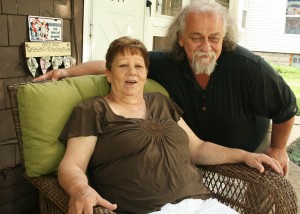 Gary and Jackie Shuck pose for a photo on their new patio Thursday at their home, 911 Jefferson Ave. The patio and several other improvements were a surprise to the Shucks, completed by volunteers from Home Depot.

Gary, who has worked at the Albert Lea Salvation Army for 11 years, helps prepare the organization’s food pantry each day, lifting boxes and organizing the food before clients come in for help.

Brian Brooks, store manager at The Home Depot, headed up the project. He said the company decided to get involved as one of the store’s quarterly projects, in which the company provides some kind of service to the area.

Brooks said he had sources who identified the Shucks in need of help and because of what the couple does to help others in the community and in their own family, they began planning for the project.

“We’re living our values and trying to give back to the community,” Brooks said.

After eating breakfast, Gary went to work at the Salvation Army, but Jackie was treated to a day of relaxation and pampering at Classic Reflections Salon & Studio.

Back at the house, volunteers were busy installing a new outdoor patio, landscaping, installing a raised vegetable garden, painting and repairing window frames and re-seeding the lawn.

Brick Furniture donated a new chair to place inside the house and carpet is slated to be installed at a later date.

One volunteer, Glen Beckman, said he knew Gary from volunteering at the Salvation Army. When he found out who the project was for, he jumped on board.

“He’s a good guy,” Beckman said. “Not much he wouldn’t do for you. A fantastic person.”

Another volunteer, Gina Solland, who has worked for The Home Depot for 10 years, said the project was enjoyable.

“It’s nice to give back to someone in need,” she said. “We love every minute.”

Less than eight hours later the project was complete.

At about 3 p.m., the Shucks came home to find their revamped home. They said many of the improvements were projects they’ve always wanted done but were never able to do because of money.

“I just can’t thank them enough,” Jackie said. “They’ve done way too much.”

“It was an uplift with the way things had been going the last few weeks,” Gary added.

Still overwhelmed, the couple said they don’t know how to repay what has been done for them.

“I’ll help out anybody until the day the Lord calls me home,” Gary said.