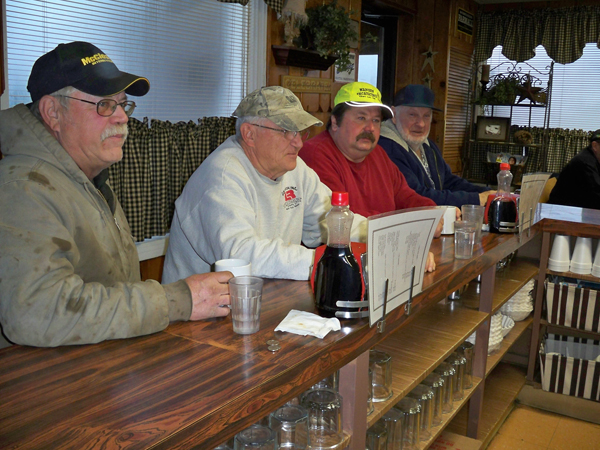 The group of breakfast fellows enjoy their coffee and conversation at the B&B Café. -- Janet Lawler

There is the lunch rush, the dinner crowd, the regulars and the breakfast crew, but it’s the early birds, the pre-breakfast gentlemen who wake up before dawn and head down to their usual café to share a good cup of coffee, a good breakfast and great conversation with others like them. They’re always seen at the counter seated at its swiveling stools discussing matters utterly enigmatic to the rest of the breakfasting customers.

“We talk about everything under the sun, mostly weather,” said Larry Wangen, a regular to the breakfast bar.

Wangen, along with Denny Wahlen, Coke Callahan and 72-year-old Dave Johannsen sit in the same places at the breakfast counter in the B&B Café, 321 Sibley St., almost every morning at 7 a.m. before going to work. Identifying themselves as “the younger crowd,” elected spokesman of the group Wangen said their morning talk consisted of anything and everything that happened locally, especially sports. 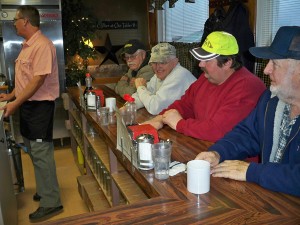 Denny Wahlen and Larry Wangen slam down their flipped quarters in anticipation of who will win them all. From left at the counter: Coke Callahan, Wahlen, Wangen and Dave Johannsen. — Janet Lawler

“We try to stay away from politics,” Wangen said. “We talk about sports, the Vikings, the Twins, how good and how bad they’re doing.”

Wangen said on one morning in January they also chat about high school teams, who wins and who doesn’t, as well as certain players. He said they have lately noticed the number of high school sport-related injuries and often comment on the tenacity of young teams who hang together despite the rough going.

“The local teams are improving,” Wangen said. “Especially the basketball team. The rest of them are always pretty good teams in Albert Lea.”

Johannsen said the new Vikings stadium has been a hot topic issue for the group lately, which melds their sports talk with another popular conversation topic — taxation.

“We want to keep the Vikings but taxpayers shouldn’t be paying for it when the owners and players make so much from us already,” Wangen said.

As a waitress passes by with a full carafe of coffee, echoes of “just a squirt” go down the line when Callahan mentions their other favorite pastime at the B&B, picking on the waitresses.

Melody Wynia, 50, has been working at the B&B since August 2011. She said several groups like Wangen’s come to share food and conversation at the B&B.

“They start as early as 5 a.m., and it gets pretty crowded by 7 a.m.,” Wynia said. “They chat about news — this morning was something about a police car at Perkins — jokes, jobs, hobbies and give us a hard time.”

Wynia puts up with their teasing knowing that it’s part of what keeps them coming back and adds to the feeling of community in the morning.

“I think they like the atmosphere, the cooking’s good, I like to think we do a good job,” Wynia said. “They love the pancakes, love the company.”

Wangen’s group could go through about 16 cups of coffee in a morning, and owner Clint Miller can test out new menu items on them. Wangen said they offered to stay and cook while Miller closed down for vacation, but their chances didn’t look good.

“Come down to get a good laugh and enjoy yourself,” Wahlen said.

All four agreed the highlight of the morning was to flip quarters. The quarter-flipping game’s origins are unknown, but Wangen knew it had been going on before Miller took over the café and betted it had been a morning tradition for at least 20 years. Miller, the staff and customers will each flip their own quarter, whoever is in the majority will continue to flip the next round until one person ends up winning all the quarters.

“The other day Denny won, I won, Wayne Thompson won a lot. It’s never real consistent,” Wangen said. “If you haven’t won for a while they write your name on the calendar — there’s been a lot of dry spells.”

Quarter droughts aren’t all Wangen has seen. Wangen owns his own snow removal service along with Callahan, but without snow Wangen said he’s felt it most financially.

“There’s a lot of spare time spent in the shop instead of out making a living,” Wangen said.

Although Johannsen is retired, he still expresses concerns similar to Wangen. Johannsen and Wangen both expressed concerns about the new cell phone law for truckers. They said it was a good idea but the fine was enough to run entrepreneurs and average working men out of work.

“We talk about taxes going up, fuel prices don’t seem to go down as fast as they go up,” Wangen said.

The group also came up with solutions to Albert Lea’s economic stagnancy. Wahlen said Albert Lea is mistakenly underdeveloped even though the two interstates give it the perfect opportunity to be. Instead, Wahlen said, otherwise the business goes to Owatonna. Wahlen voiced the key to revitalizing Albert Lea was keeping the younger generation.

“A lot of these kids come in and sit in the back and leave and you never see them again. There’s nothing to keep them,” Wangen said. “If not for Lou-Rich and the hospital, it would be pretty slim in this town.”

Despite the heaviness that sometimes pervades their morning musings, Wynia said they mostly come for fun conversations and the feeling of togetherness.

“It’s really important to go meet with friends,” Wynia said. “It takes the stress out of everyday life.”

Wangen said though Johannsen may be retired they feared he may not return once his wife found out where he was spending his mornings.

“My wife might not let me back in,” Johannsen said. “But it’s good to get a lot of different opinions on things.”