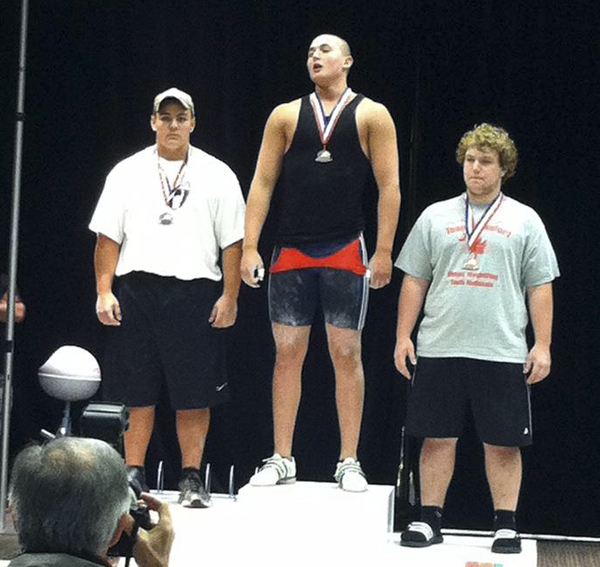 An Albert Lea boy won second in the nation for his age and weight class in the sport of weightlifting.

Sixteen-year-old Alex Seuser competed Sunday at the 2012 National Youth Championships in Dearborn, Mich., in the division for 16- and 17-year-olds and the weight class of 105 kilograms.

His coach is Jerry Bizjak, and his parents are Andy and Cherie Seuser.

Bizjak said the competition allows participants to make three tries at two types of lifts. One is the clean and jerk, and the other is the snatch.

“These are technical lifts that require lots of practice,” he said.

Seuser, the state champion in his weight class, lifted 103 kilograms in the snatch, breaking his own record by about 3 kilograms. His lift was enough to set a Minnesota record, too.

In the clean and jerk, Seuser lifted 120 kilograms, giving him a total result of 223.

The two lifts were enough to vault him to second place behind Paul Morganroth, who is a participant from Idaho, a year older than Seuser.

Also competing from Albert Lea was Hunter Hoyne, a 16-year-old who competes in the same age group as Seuser but in the 85-kilogram weight class. The coach said Hoyne competed with an ankle that wasn’t completely healed from a sprain. Hoyne was the state champ in his weight class.

Hoyne, whose class competed on Saturday, lifted 70 kilograms in the snatch and 91 in the clean and jerk, for a score of 161.

Bizjak said it was the first time any Albert Lea weightlifters competed at the national level.

“It was nice that they took a big step,” he said.