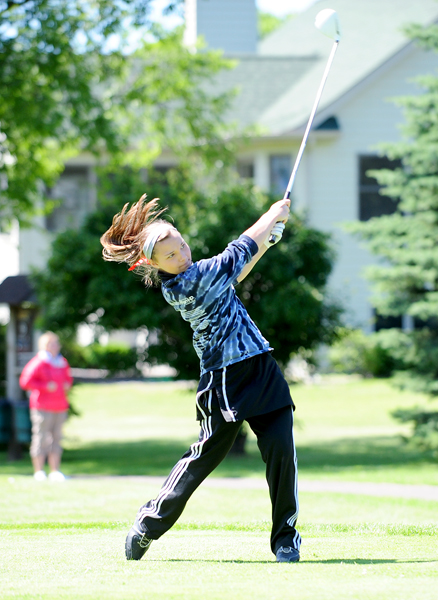 United South Central’s Alli Wood tees off Hole 9 at Pebble Creek Golf Club on Tuesday. Wood shot an 87 and is in 10th place after day one. -- Brandi Hagen/Albert Lea Tribune

BECKER — After day one at Pebble Creek Golf Club, a par 72 course, and on her fourth trip to the state golf tournament, United South Central’s Alli Wood is in 10th place.

The Rebels girls’ team sent three individuals to the Minnesota State High School League state golf tournament that began on Tuesday in Becker. The other two individuals were Kyley Bullerman and Veronica Schindler.

Wood led the other two girls with a score of 87 for the day. Bullerman shot a 109 and Schindler shot a 99. There are four girls from Class A tied for first place at Pebble Creek with scores of 82.

“I need to keep a positive attitude which will help both me and the others,” Wood said. “I need to be a good role model.”

Rebels head coach Brad Huse said the girls are used to the course because they went to state as a team last year.

“Kyley and Veronica will come back tomorrow and shoot a lot better,” Huse said. “They struggled today, but they know what they did and they can correct for those mistakes.”

Last year Wood finished 12th, and Huse is hoping she can make it to the top fix or six this year.

“I had fun the entire day,” Wood said. “The back got to me, but I can’t wait until tomorrow to improve it.”

After Tuesday’s round Wood was five strokes off of the lead.

“She shot great on the front nine,” Wood said. “She had a little trouble on the back with No. 10. After that, she buckled down and did great.”