Erin Jean Dahl and Justin Michael Dahle were married at 2:30 p.m. April 10, 2012, on the USS Riverside on the Colorado River in Laughlin, Nev. The Rev. Janice Devemcey performed the double-ring ceremony. 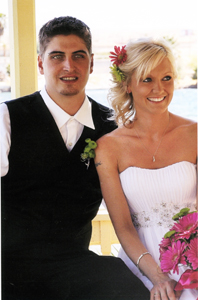 Parents of the bride are Daniel and Paula Dahl of Albert Lea.

Parents of the groom are Bobbie and Kevin Bell of Stewartville and Tod and Tess Dahle of Arizona.

Maid of honor was Jourdain Blanchette of Phoenix, Ariz.

Erin is a 2004 graduate of Albert Lea High School and a 2006 graduate of Riverland Community College. She is employed at Great Clips in Rochester.

Justin is a 2005 graduate of Stewartville. He is employed at The Loop in Rochester.

A reception will be held Aug. 25 at Todd Park in Austin.

A wedding trip was spent in Laughlin, Nev., for a few days. The couple resides in Rochester.