“Everything is nearly copacetic. I’m no better than I ought to be and I’m still just a little older than my oldest teeth. I have so much personal magnetism that I keep short-circuiting my electric razor. Had quite a rain at the home place the other day — a real stumpwasher. The place needed a bath.”

“How is your father doing? I saw him briefly at the post office the other morning,” I say.

“He doesn’t have that many active ingredients. He’s as sharp as a mashed potato and he stays busy trying to keep from being busy. All kidding aside, Pop is doing pretty good. He can’t half see and can barely hear, but at least he’s still driving. Ma is mad at him. That’s been a constant in their marriage. Once upon a time, Pop did something really stupid. Ma chewed him out for it. Pop apologized, they made up. However, from time to time, Ma mentions what he’d done. One day, Pop had had enough. ‘Sugar Britches,’ he said to Ma, ‘Why do you keep bringing that up? I thought your policy was to forgive and forget.’” 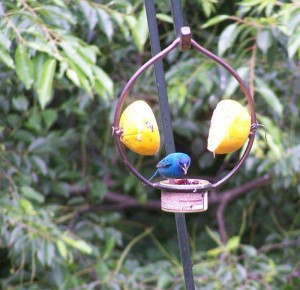 “It is and Ma agreed before saying, ‘I just don’t want you to forget that I’ve forgiven and forgotten.’”

I stopped on a hot day to get some iced tea at a fast food restaurant situated near the highway. I watched house sparrows flutter about the parking lot. Some of them flew in and out of the grilles of automobiles. Those are good places for the birds to find fried insects. House sparrows make themselves so much at home around fast food places that they could be called burger kinglets.

I looked outside to read a page of the book of nature. Bees were doing busy work as an indigo bunting fed on the grape jelly I’d put out for the orioles and catbirds. The yard provided an avian revelry. Three baby robins, fuzz balls with beaks, supplied the centerpiece to a lilac outside the window of our home. Each day, my wife and I checked on the babies. They grew rapidly thanks to the constant supply of worms brought to them by their parents. Then the day came. The young robins had developed wings. They became antsy. The nest was cramping their style. Lacking anything that could be called a real tail, each young bird stepped to the edge of the nest and fluttered — testing its wings. One at a time, each of the new robins left the nest. Their departures were of the accidental on purpose kind. Each exit was a combination of a jump and a fall. It wasn’t unlike the way many of us left home. A youngster talks about going, but it never seems possible until he receives that suitcase as a graduation present from his father. Henry Ward Beecher said, “There are only two lasting bequests we can hope to give our children. One of these is roots, the other, wings.”

The young robins had wings

Thirty minutes after the last baby had left the nest, the mother flew into the nest and stared at it. She looked long, as if she couldn’t believe that her babies had flown the nest. Many a human mother has looked at her empty nest of a child’s bedroom in the same manner.

Fifteen minutes later, the father flew in and gave the nest a good look.

Linda Brekke of Owatonna asked how to tell if the eggs in a mallard’s nest hatched or were taken by a predator. Mallards have a 23- to 30-day incubation period. When hatching, a duckling uses its egg tooth (a hard toothlike projection on the bill) to make a circular cut across the blunt end of the egg. That edge is jagged. As the empty shell dries, the inner membrane contracts and rolls the chipped edge inward. Unlike predated eggs, hatched eggs have no yolk or egg white left inside the shell. A crow makes a small puncture in the egg, inserts its bill into the hole to lift the egg, and drains the contents. It might eat the egg on the nest, but often carries it off. Gulls make similar holes, but generally eat eggs at the nest. Foxes generally carry the eggs away from nests to eat or cache for later consumption. If a fox catches a mallard on the nest, the nest will be damaged, with scattered feathers or carcass remains. Raccoons and skunks seldom remove eggs or eggshells from nests. They eat them on site. Coyotes take eggs singly, often by pawing the egg and some nest material from the nest. Weasel or mink predation shows eggshells with numerous puncture marks and fine serrations along the edge of an opening. There would be no displaced nest material. Finding a dead hen with bite marks in the cranium and/or neck may indicate a weasel or a mink destroyed a nest. Mallard ducklings are precocial. That means they are able to feed and move about on their own within minutes of hatching. They remain dependent on the mother for guidance, protection, and waterproofing for 42 to 60 days.

Altricial birds are the opposite of precocial birds. They hatch naked, blind and helpless. They are featherless except for sparse down. They move little and are dependent on their parents for care. Hawks, owls, jays, doves, robins, crows and herons are some examples of altricial birds.

Hen turkeys occasionally have beards. Straight or J-shaped droppings are those of a tom. Bulbous or spiral droppings are from a hen.

“We can throw stones, complain about them, stumble on them, climb over them, or build with them.” — William Arthur Ward