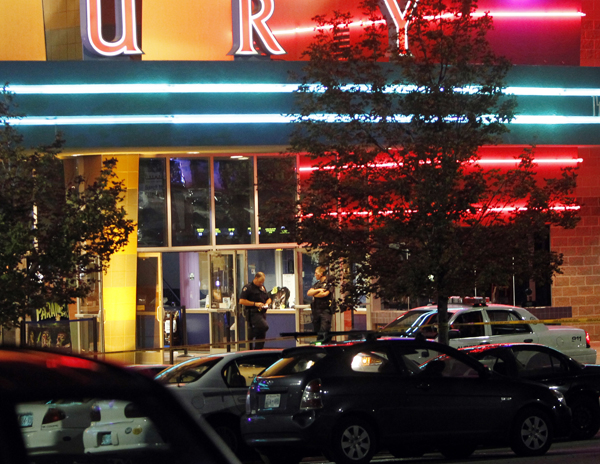 Police are pictured outside of a Century 16 movie theater this morning where as many as 14 people were killed and many more injured at a shooting during the showing of a movie at the in Aurora, Colo. -- Ed Andrieski/AP

AURORA, Colo. (AP) — A gunman wearing a gas mask set off an unknown gas and fired into a crowded movie theater in suburban Denver at a midnight opening of the Batman movie “The Dark Knight Rises,” killing 12 people and injuring at least 50 others, authorities said.

Moviegoers didn’t know what was happening and some thought the attack was part of the show. Then they saw a silhouette of a person in the smoke at the front of the theater near the screen, pointing a gun at the crowd.

“I told my friend ‘we’ve got to get out of here,’ but then he shot people trying to go out the exits,” Jennifer Seeger said. She said the shooter made his way up the aisle, firing as he went, saying nothing.

Holmes is in police custody, and the FBI says there is no indication that incident is tied to any terrorist groups.

Some of those injured are children, including a 3-month-old infant who was shot.

Police earlier said 14 people were dead, but later revised the number to at least 12. It was not immediately clear for the reason for the revision.

Witness Shayla Roeder said she saw a young teenage girl on the ground bleeding outside the theater.

“She just had this horrible look in her eyes …. We made eye contact and I could tell she was not all right,” Roeder said.

Victims are being treated for chemical exposure apparently related to canisters thrown by the gunman. The shooter was arrested shortly after the attack at 12:30 a.m. MDT at the multiplex theater at a mall in Aurora.

Aurora police spokesman Frank Fania said he didn’t know yet if all the injuries were gunshot wounds. He said some might have been caused by other things such as shrapnel.

Officers came running in and telling people to leave the theater, Salina Jordan told the Denver Post. She said some police were carrying and dragging bodies.

Officers later found the gunman near a car behind the theater.

“A gas mask, rifle, handgun at least one additional weapon (were) found inside,” he said.

The suspect was taken into custody, but no name was released. Oates said there’s no evidence of any other attackers. There was also no immediate word of any motive.

The suspect spoke of “possible explosives in his residence. We are dealing with that potential threat,” Oates said.

A large truck lettered “bomb squad” arrived near an Aurora apartment complex where the suspect is believed to have lived, about four miles from the theater. Dozens of police squad cars, vans and other vehicles were already at the scene, along with black-clad officers carrying automatic weapons.

Police evacuated residents of the building. Oates did not say whether any explosives had been found.

He said police also checked for explosives in the parking lot and at the Century 16 theater and secured those areas.

President Barack Obama said he was saddened by the “horrific and tragic shooting,” pledging that his administration was “committed to bringing whoever was responsible to justice, ensuring the safety of our people, and caring for those who have been wounded.”

Moviegoers spoke of their terror as violence erupted and people around them fell victim.

Benjamin Fernandez, 30, told the Post that he heard a series of explosions. He said that people ran from the theater and there were gunshots as police shouted “get down!”

Fernandez said he saw people falling, including one young girl.

Jordan told the paper that one girl was struck in cheek, others in stomach including a girl who looked to be around 9-years-old.

Jordan said it sounded like firecrackers until someone ran into Theater 8 yelling “they’re shooting out here!”

“Like little explosions going on and shortly after that we heard people screaming,” he told the station.

Hayden said at first he thought it was part of a louder movie next door. But then he saw “people hunched over leaving theater.”

The police chief said 10 victims died at the theater and four at area hospitals.

At least 24 people were being treated at Denver area hospitals.

KUSA reported that some hospitalized victims were being treated for chemical exposure, related apparently to canister thrown by gunman.

Eleven people were being treated at the Medical Center of Aurora for gunshots and ranged from minor to critical condition. Two others walked in to be treated for tear gas contamination.

Denver Health had seven victims — one in critical and the rest in fair condition.

The youngest victim reported was a 6-year-old being treated at Children’s Hospital Colorado, where a total of six victims were taken. Their condition wasn’t known.

Aurora is on Denver’s east side and is Colorado’s third-largest city with 327,000 residents. It is home to a large Defense Department satellite intelligence operation at Buckley Air Force Base, as well as The Children’s Hospital, the University of Colorado Hospital and a future Veterans Affairs hospital.