A day of remembrance 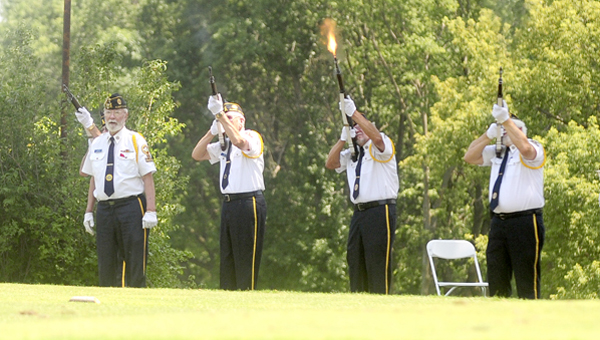 A gun salute was done at Green Lea Golf Course on Saturday in honor of fallen soldier chief warrant officer Corey Goodnature. Goodnature died June 28, 2005, when his helicopter was shot down by enemy fire in Afghanistan.

To many, it is a reminder of fallen soldiers, heroes and loved ones who have served their country.

“Whenever I hear the national anthem, I have my hand on my heart and I look straight into the flag and I see my hero, Chief Warrant Officer Corey Goodnature, flying a Chinook helicopter on a mission going into battle to save one of his fellow commrades,” Larry Goodnature said. 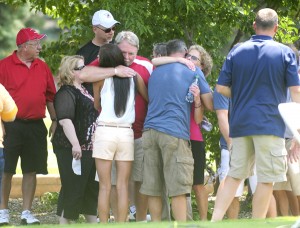 Corey was Goodnature’s nephew who was a pilot and flight lead for the 160th Special Operations Aviation Regiment.

Corey, the son of Deb and Don Goodnature, was killed in action on June 28, 2005, when his helicopter was shot down by enemy fire in Afghanistan.

Even though it’s been seven years, Corey is remembered just as much as the day it happened.

“I tell myself every year I’m not going to break down,” Goodnature said. “Every year it just seems like I do. It doesn’t get any easier.”

To honor his nephew, Goodnature has acted as the master of ceremonies for all seven events.

On Saturday, a mix of emotions were elicited as Goodnature and other speakers told both serious and funny stories to remember Corey.

“But when it came down to getting the job done, Corey took it to another level,” Goodnature said. “He had that courage, that secrecy, that bravery and that willing to sacrifice attitude, something that very few of us could do.”

Eric Palmer and Kevin Kermes, friends of Corey, were the guest speakers.

They also shared memories of Corey.

Palmer told how on a fishing trip Corey chopped down a live tree because the group needed firewood.

“Out in the water you could hear his signature laugh and his voice saying, ‘Hey look at me, I’m a beaver,’” Palmer said with a laugh.

Palmer also told how he camped outside with Corey on New Year’s Eve when it was 10 below. Even though they were frozen and only got a half hour of sleep, neither one of them were about to go back inside.

“The thing that gravitated everybody to Corey was that he was serious, he was funny and he was quick,” Palmer said. “People use the word hero a lot, and he was one.”

Deb and Don said Corey’s friends feel like their own sons, the son they no longer have.

The golf outing has continued to be held to raise money for scholarships to help out high school graduates. About 190 golfers and many more spectators showed up for Saturday’s event even though temperatures were around 100 degrees.

“It’s really humbling,” Don said. “I can’t believe people are going to keep doing this. It keeps getting bigger.”

Following the nine holes of golf, a meal and silent auction was held.

Before Saturday, the events have raised almost $100,000 for scholarships.