A visit to Sweden is eye-opener

Through farming connections and a mutual friend, our family was blessed to have met Erik Sundell, Per Hallnevik and Erik’s girlfriend, Lovisa Frick. Erik and Per stayed with us in the fall of 2009, and Erik and Lovisa have come every fall since. We just couldn’t turn down their offer when they invited us to come spend 10 days with them at their home in Alingsas, Sweden.

It was an adventure. 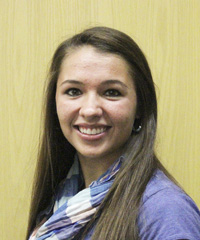 I always hear people say that traveling is a once-in-a-lifetime thing. The people were so nice. The food was great. I would really like to tell you differently, just to be original, but I can’t. The way our friends’ families opened their doors to us 24/7 and waited on us hand and foot was incredible. We never once had to worry about supper because we had a different family cooking wonderful Swedish cuisine for us every night. And to say the food was great would be an understatement. I’m sure the man at the security check got a kick out of seeing a 2-kilogram candy bag in my suitcase on the trip home, courtesy of the Alingsas grocery store’s candy aisle.

There was a big family barbecue to celebrate the birth of Erik and Lovisa’s 1-month-old baby girl, Ines, Erik’s 29th birthday and the arrival of the Thompson family from the USA. Over 40 of Erik’s friends and family came to his parents’ home, Stephen and Yvonne Sundell. They all seemed genuinely pleased to meet us, and we had some great conversations discussing everything from Minnesota Vikings to farming flax.

Our busy itinerary included things such as: shopping in Gothenburg (I realized my math has gotten a bit rusty as I had difficulties dividing Swedish crowns by seven to see what items cost in American dollars), visiting a fishing village, swimming on the Atlantic coast, hunting wild boars, touring Per’s logging operation and Erik’s trucking business, fishing, riverboat tours and attending a festival in Trollhattan.

We got to attend the prestigious Gothia World Youth Cup and watched games of Japan vs. Sweden and Brazil vs. Sweden. There were 1,600 teams from 70 different countries, with players from 11 to 18 years old, playing at soccer fields all over Gothenburg. It was so cool to scan the bleachers and see people from all over the world gathered in the name of European football.

Being there made me wish that America took a little more initiative to teach second languages. Swedish children are taught English at a young age. It opens up a world of opportunity when you are fluent in more than one language.

Along with being familiar with our language, Sweden has plenty of American influence. It was common to flip on the radio and hear Bon Jovi, Carly Rae Jepsen, Pearl Jam, Taio Cruz and other popular American artists. It made me smile to overhear Norwegian girls singing along to the Backstreet Boys at the harbor and pass by kids at the mall belting out “Call Me Maybe.” 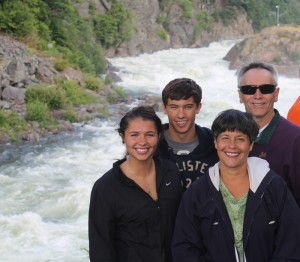 The Thompson family in front of a dam in Trollhattan, Sweden. From left to right: Me, my brother, Samuel, my mother, Karina, and my father, Everett.

I saw everything in a new light while I was there. (Literally, it was a new light because it doesn’t ever get completely dark during the summer. This was discovered by my brother, Samuel, and I when we snuck out to go fishing in the dark and realized that it still wasn’t pitch dark at 12:30 a.m.) The ordinary things I do here seemed like an adventure in Sweden. Going biking doesn’t sound that exciting but biking around the Alingsas countryside is breathtaking. (I frequently had to huff and puff because it was quite hilly.) Last time I checked, I can’t take a stroll through rural Clarks Grove and see huge jackrabbits, moose and albino deer in the fields. And I take pride in the fact that the first time I ever went kneeboarding and wakeboarding was on a lake in Sweden!

When my mom asked if I was homesick, I said no and said I just missed my dog, Austin, and frappes. I noticed that people there definitely have the finest sweets available to them, but they exercise a lot of self-control. And they just plain exercise. I saw bicyclists of all ages on every road we took. Just being there made me want to ride my bike more and take my dog for a walk, which I’ve never done before.

But I will say it was a comfort to come home and see teenage girls wearing T-shirts, athletic shorts, and flip flops and guys my age wearing something other than brightly colored skinny jeans. I had a hard time following Swedish conversations since I didn’t know any Swedish, so it was nice to be able to eavesdrop on people again once I was back in Minneapolis.

Least favorite part of the trip? Probably the 50-minute layover in Holland that turned into seven hours. I became way too familiar with the Amsterdam airport. I also had my first encounter with European coffee, which wasn’t pleasant. (As soon as I got home I went to Caribou and got some fine American “diluted” coffee, as the Swedes referred to it. And let me tell you, a berry white mocha is water compared to their coffee.)

It was such an eye-opening experience to step into a culture on the other side of the world and be so welcomed. They have a gratitude for their loved ones and the natural beauty around them that is hard to find here. My only hope is to soon have the opportunity to do it all over again.

Colleen Thompson is an intern this summer at the Albert Lea Tribune.