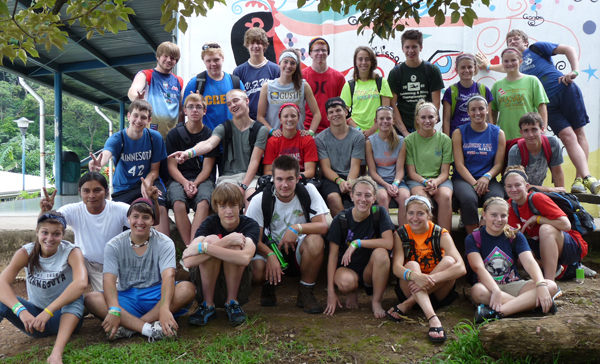 The group of students pose for a photo after painting a local high school in Costa Rica. -- Submitted

While many of you were experiencing balmy temperatures in early June, 32 local residents were truly in the tropics. Twenty-seven Albert Lea High School students and their chaperones went on a whirlwind tour of Costa Rica in Central America from June 4 to 11. All students were Spanish students at ALHS this past year, though some have now graduated and are moving on to higher education opportunities elsewhere.

For one week, we experienced a mixture of adventure and learning. Our tour began with a trip to the Poas Volcano where we hiked to over 8,000 feet above sea level to look into the crater. We were fortunate that the clouds held back for our visit, so we could see the lagoon in the crater. Our students then had the pleasure of learning about mountainous roads as we ventured to the Sarapiqui Rain Forest. Perhaps eating lunch on the bus was not our best idea. 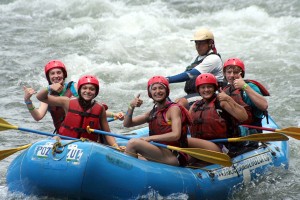 Our afternoon agenda item was a “chocolate tour.” In Costa Rica, touring means so much more. Our chocolate tour began with a hike across a suspension bridge and through the Tirimbina Forest. Some of our students learned about fire ants on the way and learned the importance of closed-toed shoes! They created a new style of high-step marching to keep the fire ants from greeting their feet! We entered an outdoor classroom where we learned the history of chocolate from the Mayans and Aztecs and learned about the process of changing cacao to chocolate with taste tests along the way.

Day two of touring was high-adventure day, including fun on zip lines and whitewater rafting.

Highlights of the next few days of our trip included a tour of a Dole Pineapple Plantation, which was focusing on organic methods, and a swim in hot springs at the base of the Arenal Volcano. We also learned about the coffee industry and did some tasting as we learned about the history of coffee growing in Costa Rica. Two of our students got a lesson in becoming official coffee testers for Café Britt. Later in the week students learned to dance the salsa and merengue and had a Costa Rican cooking lesson where they learned about the squash-like vegetable chayote. 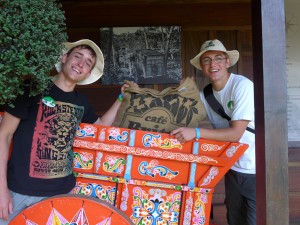 Nick Santee and Kyle Zogg pose for a photo at Cafe Britt.

One of the elements of the trip that always causes mixed emotions is the family stay, when our students have the opportunity to stay in a house with Costa Ricans for four nights of the trip. We tour together during the day, but students stay in groups of two or three in houses at night. The first night of the homestay usually begins with a panicked look and a search for last-minute important vocabulary.

The second day usually begins with the students being a little shocked from their first night of immersion with the Spanish language and anger at their teacher for abandoning them again on the second night! By the third morning, students have gotten over their initial shock and have begun to connect with the families. 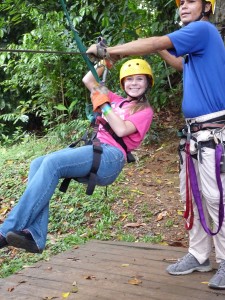 Samantha Reim tries out the zipline.

This year we had Costa Rican mothers waiting at the bus stops with our kids, eager talk of playing cards late into the night with their families and students showing great gains in their language abilities and confidence in the four nights they spent in homes. While this is often the most uncomfortable element in our tour for some, they grow so much from the experience that I will try to include it on all future trips. The Costa Rican people are so welcoming and friendly. They are eager to teach others about their country and want us all to leave with positive experiences. By staying with a family, students learn first hand about life in a Costa Rican home.

On one of our last days in the country, we had the opportunity to give back to Costa Rica. We brought a donation of school supplies and traveled to a high school to paint some exterior walls. I underestimated my students when I heard that our service project would be approximately four hours. I was sure they would complain and wish they were touring instead. 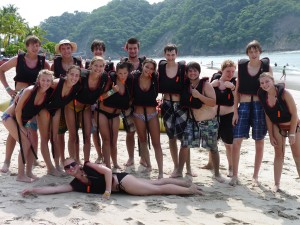 Students are ready to snorkel during their Costa Rica trip.

On the contrary, they attacked the project with enthusiasm and grace. They worked eagerly and willingly. They could see that the school did not have the resources we have here. The rooms were equipped with few supplies and did not have computers, that we could see. Our students commented on how fortunate they are but were not judgmental. One student urged me to hold a drive at our school to get more school supplies to send to Costa Rica. They definitely have a wider worldview after our brief trip.

Our trip was organized by Interact Travel, based in Green Bay, Wis. Their arrangements were excellent. We were well-fed on fresh fruits and gallo pinto (rice with black beans). Our local guide, Alcides Elizondo Castro, was amazing! He not only taught us about things we were seeing and doing but also educated us about the Maleku tribe where he resides in northern Costa Rica. He travels week after week with student groups, but he left us feeling like we were the most important! We sent some of our school supplies to his tribe, for which he was very thankful. I hope to include a trip and community service project at Maleku on a future trip with Albert Lea High School students. 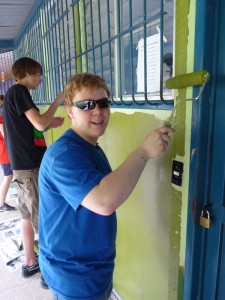 This group was the largest group I’ve taken on a trip. I had a moment of apprehension on our trip to Costa Rica. We were in the Dallas airport moving toward our next gate. Leading the group up an escalator, I looked down to see this big group of young people following me. I thought, “Oh no, how are we going to be able to manage such a large group?” I found out rather quickly that I did not need to worry. These ALHS students were awesome! They were positive, kind, open-minded and considerate to all. They were super ambassadors from our community. I also want to thank my fellow chaperones: Steve Brownlow, Terry Gjersvik, Ellie Wiemerslage and Doug Lind, all of whom counted to the number 27 several times each day for me! We would all like to thank Albert Lea Area Schools for supporting our trip, which was real-world learning at its best.

I asked my students to describe the trip in five words or less. More than half of them used the phrase, “pura vida,” which directly translated means pure life. However, in Costa Rica, this phrase is used as a greeting, question, answer and goodbye. It’s a way of life that we experienced for a week. Pura vida, life is good.