Funeral services for Anne A. Casterton, of Albert Lea, will be held at 10:30 a.m. Wednesday at All Saints Catholic Church in New Richland. The Rev. Swami will officiate. Interment will be in Calvary Cemetery, New Richland. Visitation will be from 5 to 7 p.m. Tuesday at Bonnerup Funeral Service, Albert Lea, and one hour before the service at the church. 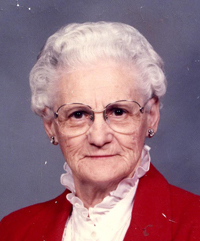 Anne died on Saturday, July 21, 2012, at Thorne Crest Retirement Community in Albert Lea. She was 92.

She was born on Jan. 6, 1920, in Twin Lakes, the daughter of Jerry and Margaret (Cunningham) Callahan.

Anne graduated from Freeborn High School with the class of 1939.

She began working for area families and met Roland L. Casterton, whom she married on Nov. 20, 1941. During Wold War II, while Roland was in the service, she worked as a welder in the ship yards in Spokane, Wash.

Following their marriage they had lived in Lerdal, Clarks Grove, Ellendale, Hartland and in her last years Albert Lea.

She was a member of All Saints Catholic Church, New Richland.

Anne enjoyed playing cards, baking, sewing and gardening. Her favorite times were those spent cooking and entertaining for family gatherings.

She was preceded in death by her parents; her husband Roland in 1989; brothers: Edward, Robert and Patrick Callahan; and sister Mary Ellen O’Leary.