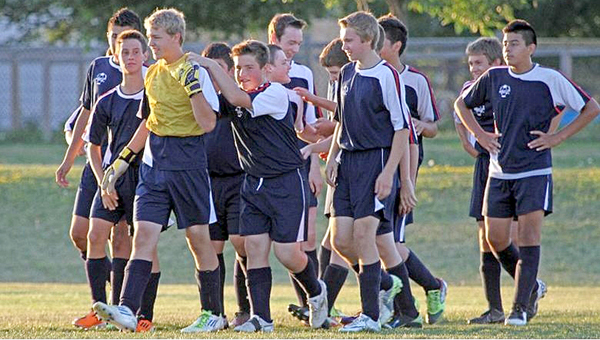 Members of the Albert Lea U-14 Boys Soccer team congratulate each other after their 5-1 win over Northfield July 9 to win the division championship.

The Albert Lea U14 Boys soccer team defeated Northfield on July 9, advancing to the state tournament for the second year in a row. The team, coached by John Doran and Stacey Overgaard won the south boys U14 Classic 2 division. The division championship allows the team to advance to state without going through playoffs. 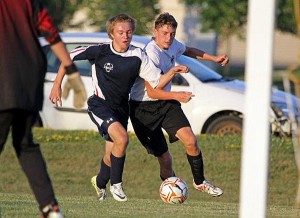 Colton Mowers fights for the goal. Mowers scored one of five Albert Lea goals during the win against Northfield.

Northfield scored early in the first half and held the lead for several minutes. About 10 minutes into the game Albert Lea started to rally. Albert Lea players Fio Garcia, Colton Mowers, Ali Garcia and Schafer Overgaard all scored to win the final game in league play 5-1.

“I am so proud of the boys this season,” said Doran. “They have been a dedicated group of young men, truly grasping the team concept.”

The team allowed only eight goals all season. According to the Minnesota Youth Soccer Association website, no other Classic 2 team in the state allowed fewer goals this season.

“We won the tiebreaker with La Crescent because we have a better goal differential,” Overgaard said.

Doran also commented on the season.

“It has been so fun to watch them continue to develop their skills this season and I look forward to seeing what they can do at state for a second year in a row,” Doran said.

The team will compete in the Minnesota Summer State Championship beginning on Saturday in Lakeland.