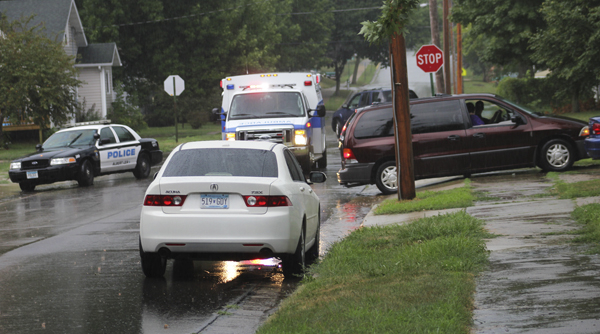 Police and ambulance personnel respond to a crash at about 6:55 p.m. Wednesday during a brief downpour that struck Albert Lea. The crash was at the corner of Bridge Avenue and Sheridan Street. -- Tim Engstrom/Albert Lea Tribune

A 12-year-old boy was injured Wednesday evening after he reportedly walked backward and struck a van that was turning from Bridge Avenue to Sheridan Street.

According to police, Cecelia Lynn Krahn, 15, was driving southbound on Bridge Avenue at 6:50 p.m. when she made a left turn onto Sheridan Street.

The boy, identified as Wal Wal, was reportedly standing in the middle of the street staring at the sky and walked backward into the vehicle.

The extent of his injuries are unknown.

Neither Krahn nor her passenger, 78-year-old Donald Horning, were injured.

A laptop was reported taken from a vehicle at 1817 South Shore Drive at 8:32 a.m. Wednesday, according to police.

A tan Mercury station wagon was reported damaged at 8:55 a.m. Wednesday at 204 E. Front St. According to police, it looked as if someone took a knife to the side of the car.

A PlayStation 3 was reported taken from 1021 Virginia Place at 7:02 p.m. Wednesday, according to police.