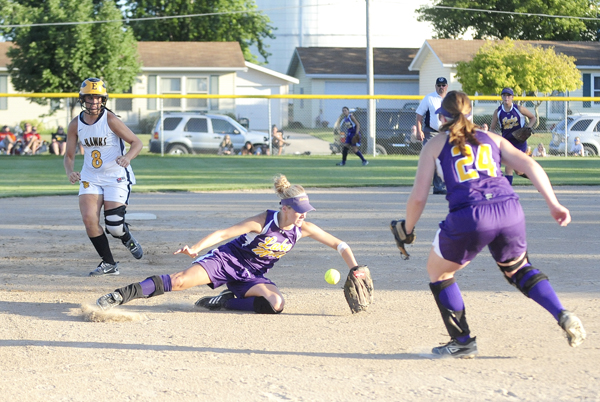 Carlie Christenson lunges for the ball in the top of the fifth inning against Emmetsburg in the final round before state. -- Brandi Hagen/Albert Lea Tribune

ALGONA, Iowa — Lake Mills’ pitcher Josie Brackey hit a homerun in the bottom of the fifth inning against Emmetsburg in the final round before the state tournament on Monday in Algona to tie the game 1-1.

“I was like, ‘well here we go, it starts now,’” Bulldogs coach Sabrina Roll said.

Hoping to have a repeat of the game against Pocahontas Area on Friday where they scored eight runs in the fifth, the Bulldogs prepared themselves to fight through all seven innings.

Unfortunately for the Bulldogs, the Hawks scored two runs in the top of the sixth to become state qualifiers with a 3-1 win.

The Hawks (32-9) advance to the state tournament in Fort Dodge, Iowa, to play Des Moines Christian (27-6) in the first round of play on July 16.

Roll said even though the focus on Monday night was about the loss, the team has much more to be proud of.

“We made quite a few milestones in the season and huge improvements from the beginning of the year,” Roll said. “We’ve got to look back on what we’ve done and what we’ve accomplished as a team as a whole and be proud of that.”

She said one of the biggest improvements the team has made has been in their attitude.

“Even coming into the bottom of the seventh inning being down, the girls still wanted it,” Roll said. “Before it was like, ‘oh they scored, we lost.’ Here it was like, ‘we can still win.’”

“There were some tears shed in the circle after the game, but if there wasn’t, I would be a little more concerned,” Roll said. “It means it meant something to them.”

Roll added that Brackey, the team’s five-year starting pitcher, will be missed next year as she goes on to play at Iowa Central Community College in Fort Dodge.