The services celebrating the life and death of our parents, grandparents, great-grandparents and friends will be Saturday at the First Lutheran Church, Albert Lea. The Rev. John Holt will officiate. Visitation will begin at 9:30 a.m. preceding the service at 10:30 a.m. Interment will be in Graceland Cemetery, Albert Lea. 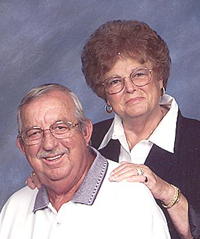 Carl “Buck” Schumaker was born June 11, 1935, in Dover, Mo., the son of Albert and Josephine (Noel) Schumaker. Buck graduated from high school in Cole Camp, Mo. Jean was born on Sept. 17, 1935, in Albert Lea. The daughter of Floyd “Lefty” and Hazel (Crocker) Heilman, she graduated from Albert Lea High School.

The two traveled to Kansas City, Mo., where they met and were united in marriage on Dec. 17, 1954. Following a few years in Kansas City, Grandpa Lefty talked mom and dad into moving home where dad began 43 years at Wilson & Co. and spent more than 20 years bartending at the Eagles Club. He partnered and co-owned Dog and Suds in Albert Lea. Jean waitressed at the Elks and shared the partnership of Dog and Suds, and spent time working at Thorne Crest Retirement Community. They were both active members of the Eagles for 32 years and members of the Elks.

Jean loved crafting, golfing, baking and cooking. Most of all, they enjoyed being with their family.

We the children express our thankfulness to our parents as they showed us the real meaning of love. We now can pass on the love for generations.

God also gave us so many wonderful loved ones who passed before us, but who never will be forgotten.