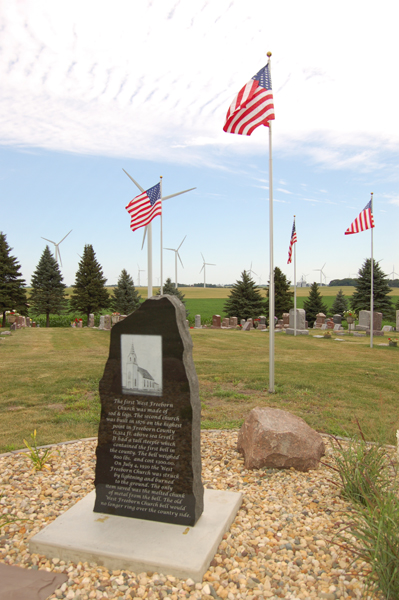 MANCHESTER — West Freeborn Lutheran Church in Manchester Township dedicated a memorial stone Sunday to the location of its first church. 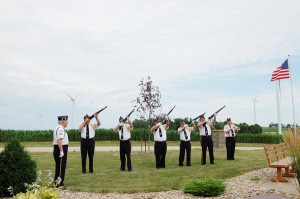 Following the usual 9 a.m. Sunday morning service, the Rev. Dennis Frank led the congregation 150 feet to the cemetery at 10 a.m. for a special dedication service.

He told the story of the church’s previous site. The congregation organized in 1867 and turns 150 in five years. Eventually, the members built a “sod and logs” building; however, no specific date is available for that structure.

A wooden church built in 1876 on a high point in Freeborn County is considered by most members  to be their first true church building, Frank said. It had a tall steeple that the stone says contained the first church bell in the county. On Independence Day in 1930, the church burned down and the only item that didn’t perish was a melted chunk of the 800-pound bell.

The monument now marks the location of that building.

After he told the story, Frank led the congregation in prayer.

“Let us dedicate this memorial stone to the glory of God,” Frank said.

The American Legion Post 56 raised the flag on one of the six flags in the cemetery. They fired a five-gun salute, and bugler Bob Miller played “Taps.”

The monument was erected on Memorial Day of last year but hadn’t been dedicated. Before, trees had represented where the church once stood.

Frank said the church’s proximity to its cemetery allows members of the congregation to visit their deceased loved ones. There is also a spot in a gazebo in the cemetery with all the names of people and where they are buried.

The dedication on Sunday was not only to remember the church that burned, but also the passed members of the congregation. The current congregation said their prayer of dedication for the fallen church while remembering the fallen veterans and their loved ones.