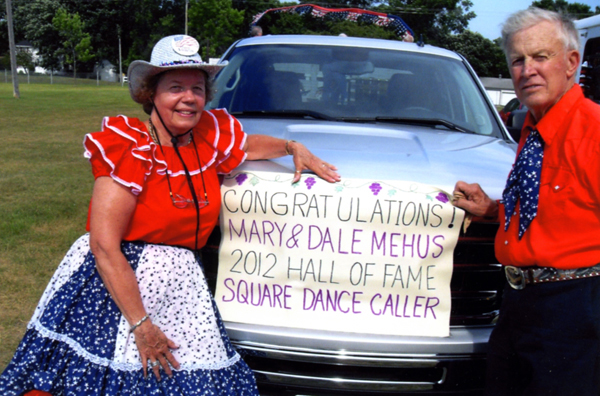 Mary and Dale Mehus pose for a photo after Mary was named the 2012 Hall of Fame square dance caller at a convention in Iowa. -- Submitted

Northwood resident Mary Mehus was honored as the 2012 Hall of Fame Caller at the 50th Annual Iowa State Square and Round Dance Convention in April. Mehus is the first female caller to receive this award.

Mehus has been dancing since she was young. She and her girlfriends polka danced for fun before Mehus discovered square dancing.

“We didn’t do roller skating like the other kids; we danced,” Mehus said.

Mary and her husband, Dale Mehus, have been square dancing for 25 years. They took lessons for a year and the next year Mary began Callers School. Professional square dancers taught her and other callers new techniques and dance terms.

Mehus has been a member of the Northeast Iowa Callers Association since 1988 and has held the office positions of president, vice president and treasurer of the association.

Every state in the country has a convention for square dancing. Iowa’s first one was in 1994, and Mehus attended that year and every year since. She and her husband also attend the Minnesota state conventions as well, including this year’s on June 9 in Brainerd. She has called at international conventions in Anaheim, Calif., and Minneapolis. Mehus has also traveled to Wisconsin, Nebraska, South Dakota, North Dakota and Hawaii to call.

Mehus began teaching square dancing in the early 1990s at the Northwood Civic Center and gives lessons in Albert Lea. She and Dale first took lessons from Gene LacCore in 1987, and after a year of lessons they began dancing. The next year Mary began caller’s school.

She calls with the Grapevine Twist Square Dancers who are based out of Albert Lea. They perform at local retirement homes, parades and fairs. The group dances every second and fourth Saturday of the month at the Senior Citizens Center at 1739 W. Main St. in Albert Lea.

“You build up your mind, and it’s very good exercise,” Mehus said of square dancing.