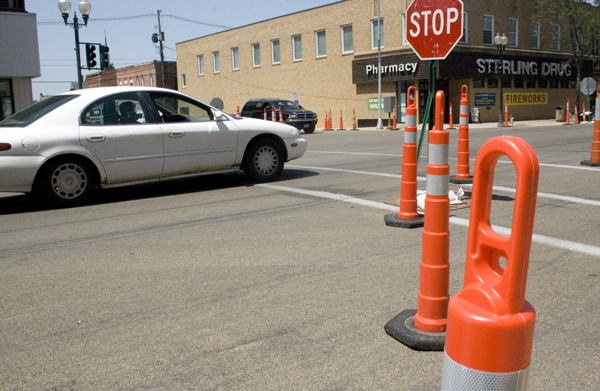 A car stops at a stop sign at the intersection of Broadway Avenue and William Street Wednesday. The street has cones in place where proposed sidewalk and curb would be placed in the redevelopment of the downtown. -- Sarah Stultz/Albert Lea Tribune

In the next few weeks Albert Lea residents will have the chance to weigh in about some proposed changes to a handful of downtown intersections. 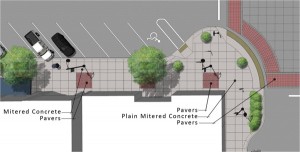 A rendering of what a corner would look like with a bumpout curb.

Should Broadway Avenue be not so broad?

Bumpouts are rounded extensions of the curb that are designed to increase safety for pedestrians by reducing the crossing distance. Officials have stated they are also designed to calm traffic.

Kirk Foley, owner of Prairie Wind Coffee, which opened earlier this month in the Jacobson Building, said he has heard some confusion about why the cones are in place and what they would be used for. He said he has explained the proposal on several occasions. The cones are in place on a trial basis to test whether the bumpouts will work as proposed. 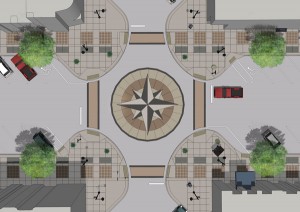 A rendering of the possible bumpouts at an intersection on Broadway Avenue.

They are part of a larger proposed $4 million reconstruction of Broadway Avenue from Main Street north to Fountain Lake Park.

The bumpouts will be coupled with the elimination of traffic lights at Broadway’s intersections with Clark and William streets, changing to four-way stops.

Foley said he has found that younger people and older people like the bumpouts, while the middle-aged people don’t like them as much — mainly because of anticipation of cost.

Foley said as a business owner renting on Broadway Avenue, however, he is benefiting.

“For me here, the stop and go has been good,” he said. “It’s doing what it’s supposed to — slowing people down.”

Ultimately, he said, he is in favor of the bumpouts if they can be scaled back some.

Dan McElfresh, who was downtown Wednesday afternoon, said though he does not know much about the downtown redevelopment project, his first thought when seeing the cones was that there wasn’t much space for the vehicles.

Public Works Director Steven Jahnke said though the visual perception is that the lanes are smaller, the lanes under the proposal would actually be 14 feet, which is two feet wider than a standard lane.

“The tall cones make it feel tighter,” he said.

Jahnke pointed out that right now if people are crossing Broadway Avenue they have to walk 64 feet from curb to curb.

Under the proposal with the bumpouts, it would only be 32 feet from curb to curb, lessening the distance on the street by half.

John and Jackie Abrego, owners of Expressions salon downtown, said they were in favor of the bumpouts, and they appreciate that the city is giving people time to test them out.

“I think it’s a good idea,” Jackie Abrego said. “It will add character to the downtown.”

John Abrego said though he is in favor, he knows it will take time for Albert Leans to adapt.

“It’s going to be a change,” he said. “Albert Lea doesn’t adapt to change well.”

Mary Mickelson, who works in Expressions, questioned how it would be during the winter.

“I think it would be nasty in the winter time,” she said.

Jahnke said he and other city staff are confident a grader could maneuver around the bumpouts to plow snow. The changes would, however, require city staff to pick up snow, which is usually placed in the center of the street, faster, especially at intersections.

On Friday the city’s Fire Department will bring out one of its large fire trucks to see how it can maneuver around the cones, Jahnke added.

People can contact Jahnke with input about the proposal at 377-4325 or sjahnke@city.albertlea.org.

He estimated the cones would be left up for about a month.