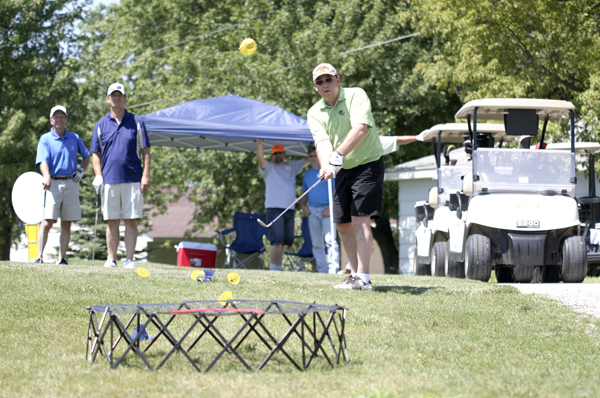 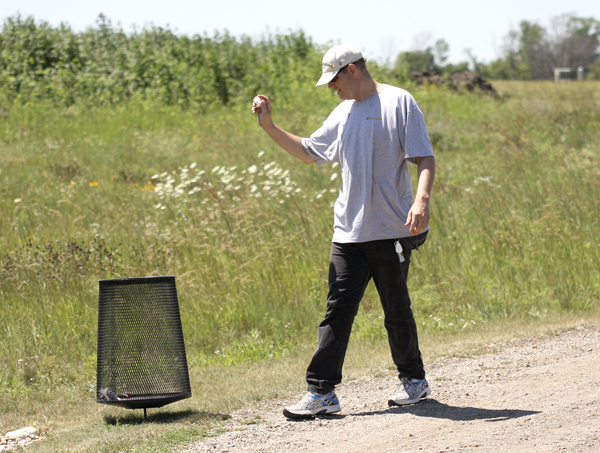 David Anderson throws away marshmallows at Hole 12 at Wedgewood Cove Golf Club. Anderson made the final decisions about who hit the marshmallows the farthest and also was in charge of cleaning them up.

Similar to every other year, a golf outing, live auction, dinner and raffle were held to raise money to help people with disabilities be able to experience more recreational activities.

According to Jo Lowe, the director of Arc, $11,000 was raised through the event last year.

Lowe and Kelli Tiegs were key people from Arc in organizing the event.

Tiegs said the goals this year were pretty similar to past years. She had said she wanted to see 26 teams golfing and have 32 sponsors on the course.

Twenty-six teams were signed up to play on Thursday and there were 36 hole sponsors.

As 104 golfers made their way around the course playing games at each hole like a marshmallow drive and a chipping with a shuttlecock competition they were awarded raffle tickets for a drawing that was held later in the evening.

At the marshmallow drive golfers purchased three marshamallows for $5 and were told they could do whatever they wanted with them. Some ate them, some stomped on them to make them easier to hit down the tee box and others debated which club to use to take on the fluffy challenge.

The hole was monitored by Kristy Paul and David Anderson.

Paul said she couldn’t believe with the wind that they went as far as they did. Some of the marshmallows flew past the end of the tee box.

Paul called Anderson the official measurer as he made the final call about whose marshmallows flew farther.

The two were stocked with more than 10 bags of marshmallows for the event.

At hole No. 5 was the new chipping game.

For $1 golfers flung shuttlecocks with their golf clubs and tried to hit a trampoline like target.

About an hour into the golf outing Jim Sauer landed his shot in the middle of the target. His name was entered into a drawing for a $50 Wedgewood Cove gift certificate. By the time Sauer hit the target, there had only been two people to make it before him.

The amount raised from the Thursday event is expected to be totaled after the weekend.

Lowe and Tiegs have a few projects in mind if enough money was raised to go through with them.