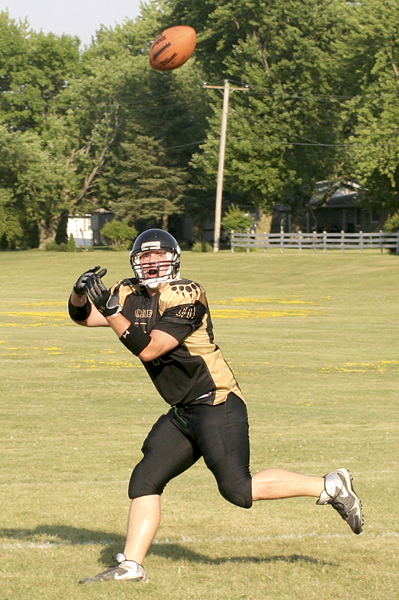 Grizzly Tony Tolbers reaches for the ball on the 1-yard line. -- Melissa Schmidt/ For the Albert Lea Tribune

The Albert Lea Grizzlies steamrolled the Minnesota River Valley Shock in the first round of the Southern Plains Football League playoffs on Saturday night at Southwest Middle School. The final score was 42-6.

The Shock came into the matchup short-handed and requested a running clock right away due to the heat and the lack of depth on their sideline.

The Grizzlies scored at will throughout the game with touchdown passes from Grizzlies quarterback Paul Ciochetto to tight end George Gerdes and wide receiver Michael Carr.

The Shock managed to score late in the third quarter with an 83-yard catch and run, when one of the Shock receivers slipped in behind the Grizzlies’ defense and sprinted to the end zone. The two-point conversion attempt failed. Grizzlies defenders Levi Fossen and Steven Salinas each had an interception during the game and defensive end Anthony Ingram had a forced fumble that he also recovered.

The Shock finished their inaugural season in the SPFL with a 1-7 record, and the Grizzlies move to 6-2 as they head back to Lake Benton for a rematch of the June 16 game against the Buffalo Ridge Wildcats.

In their last meeting the Wildcats came out on top 27-24 in a nail-biter of a game.

The Grizzlies are considering lining up a charter bus to bring fans to the July 7 game if there is enough interest.

Interested fans may send an email to algrizzlies@gmail.com, or post on the Albert Lea Grizzlies Facebook page to inquire about the bus or find out other information.

Look for the Grizzlies in today’s parade and mark your calendars for the SPFL All-Star Game hosted this year by the Grizzlies.

The game will be played at Hammer Field at 2 p.m. Aug. 4, the Saturday of the Freeborn County Fair. The game will showcase the best players from all the teams in the SPFL.

Tickets to the game will be $6 and they can be redeemed at the free shuttle to the fairgrounds for $4 off fair admission on Saturday night.