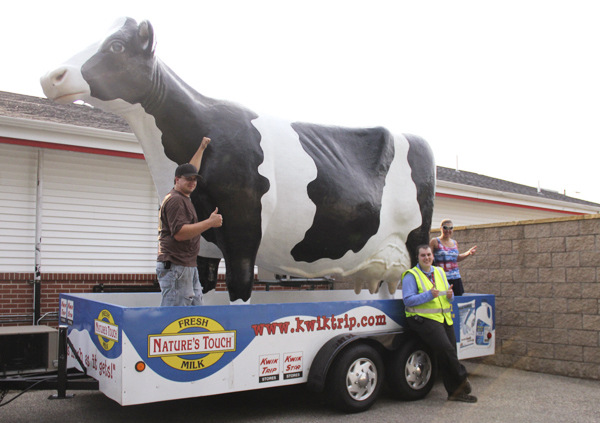 Kwik Trip workers from left are Cody Haroldson, Ty Skogheim and Char Skogheim. They plan to be part of Kwik Trip’s float in the Third of July Parade. -- Kelli Lageson/Albert Lea Tribune

A local business will be represented in the Third of July Parade, and they’re bringing something they’ve never been able to bring to Albert Lea before.

Kwik Trip, represented by both the Front Street and Garfield Avenue stores, will have a float in the parade this year. The float, owned by the La Crosse, Wis.-based company, consists of a large cow in a trailer that advertises the convenience store. Garfield Avenue store shift leader Char Skogheim said she’s been trying to get the float in the local parade for years. 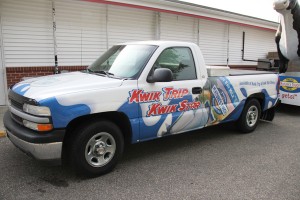 The large cow in a trailer will be pulled by this truck that advertises Kwik Trip and Kwik Star. Local employees lobbied to be able to have the float in Albert Lea's Third of July Parade. --Kelli Lageson/Albert Lea Tribune

“I saw the float when I was on vacation in Wisconsin years ago and thought ‘We got to have that in Albert Lea,’” Skogheim said.

She talked to her boss, Bill Goebel, who said he’d do his best, and last year they found out they would be able to use the float for this year’s parade. While it will advertise Kwik Trip, Skogheim said she’s going to dress it up to match the parade theme of “Celebrate Our Armed Forces.”

“We’re going to decorate it with balloons and flags,” Skogheim said.

Skogheim said workers from both of the Kwik Trip stores will walk in the parade, and some will bring their children and family members. They plan to throw candy for the youngsters, but they’ll also be providing a healthy snack, too: bananas.

Skogheim said they discussed the possibility of having something other than candy to pass out, and it’s a way to advertise their bananas, which always sell at 38 cents per pound.

They’ve ordered 14 boxes of bananas for the parade and said they’ll be handing them out. Skogheim said they will also pass out coupons for other items in the store, and some employees will dress in costumes.

“It’s a way to get Kwik Trip out there,” Skogheim said. “It’s been one of my long-term goals.”

She said with a third Kwik Trip store coming to Albert Lea in the next few years — on Bridge Avenue — that it will be good for the community to see them walking in the parade. And while she’s asked all the time when the next Kwik Trip store will be built, she said she really doesn’t know. That’s in the hands of the corporate leaders.

Kwik Trip’s float, accompanied by its employees and their families, will be seen about halfway through the parade. Look to Pages 8 and 9 for a parade lineup and Fourth of July events guide.