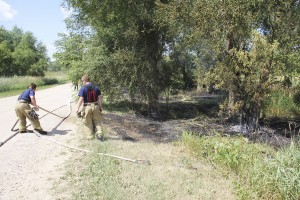 A car was reported broken into overnight Wednesday at 401 Ridge Road, according to police. A GPS system was taken.

Albert Lea firefighters doused a grass fire Wednesday along the gravel portion of Commercial Street in the south part of Albert Lea.

The fire was contained to grass beneath a stand of trees but was at the west end of a large grassy field and could have become much larger. It is the same grassy field where 19 acres burned in April because boys were playing with matches.