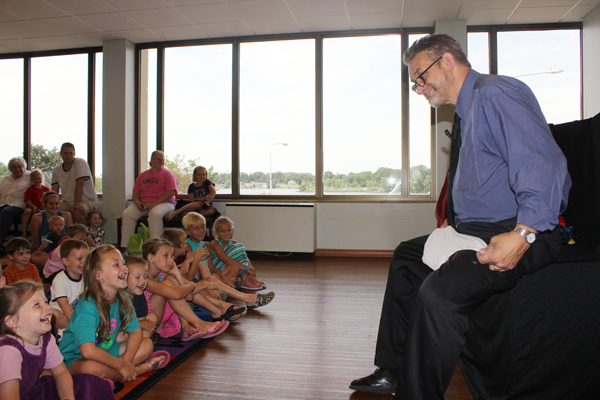 Jim Jayes turns his handkerchief puppet into a diaper and the children in the audience laugh hysterically. -- Kessa Albright/Albert Lea Tribune 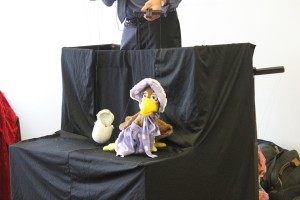 Jim Jayes and his marionettes graced the Albert Lea Children’s Library Thursday with their presence. Children’s laughter could be heard as soon as the door opened.

She was answered with 112 responses: “Good!”

The children, from infants to elementary age, sat on the carpeted area to watch Jayes as he turned two ropes into three in front of a crowd of O-shaped mouths. 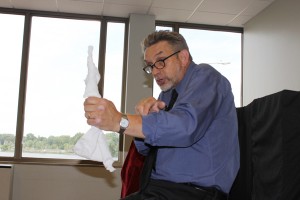 Jim Jayes at the beginning of his marionette show with a handkerchief he turns into a mouse.

“Now I could make this handkerchief stand straight up all on its own,” Jayes said as he pulled out a white handkerchief out of a bag. “But I’m sure you don’t want to see that.”

The disagreement was loud and clear as the wide-eyed children begged to see it.

Jayes proceeded to turn a simple handkerchief into different figures and shapes, such as a doughnut, pizza, diaper, purse, Tootsie Roll and mouse.

“Puppetry is taking things that don’t look real and making them real,” Jayes told the children.

He also brought out a Raggedy Ann doll with a couple “loose limbs.” The children roared as Jayes would fix one arm and the other one would become longer. 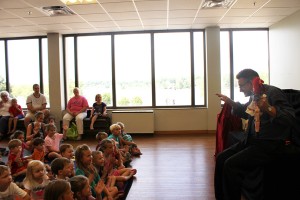 Jim Jayes waves his Raggedy Ann doll while the audience of children wave back.

He ended the show with traditional European marionettes doing tricks to music. The scarecrow that could separate his own body and a bear that could juggle a blue ball brought another bout of giggles from the children.

Jayes, originally from Sacramento, Calif., has been doing puppetry professionally for 40 years. He moved to southern Minnesota 15 years ago. Though he used to travel much more, lately he has stuck to summer shows, mainly in small, local towns. He also enjoys performing at benefits and fundraisers.

“I love putting a smile on their faces,” Jayes said.