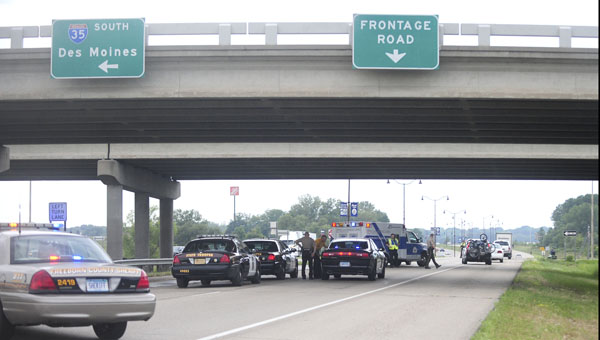 A 33-year-old Albert Lea man halted his Chevy pickup on southbound Interstate 35, exited the truck and jumped off the overpass and onto Freeborn County Road 46.

A Freeborn County sheriff’s deputy saw him jump. According to the Sheriff’s Office, a deputy happened to be patroling eastbound on County 46 and spotted the man standing on the bridge. The deputy parked and as he was exiting the squad car, the man jumped off the bridge.

The deputy never had a chance to speak to the man, and it is likely, according to the Sheriff’s Office, that he never even noticed the deputy pulling up. The incident happened at 12:53 p.m.

The clearance underneath the bridge is 16 1/2 feet, according to the Minnesota Department of Transportation. The County 46 interchange is Exit 11 of Interstate 35.

The man, whose name was not released, survived the jump. He was not struck by any cars. He was transported by ambulance to Mayo Clinic Health System in Albert Lea with injuries to his legs.