The finish line of the 5th annual April Sorensen Half Marathon. The race started in front of Country Inn & Suites in Albert Lea and ended on Main Street in Hayward. -- Colleen Thompson/Albert Lea Tribune

HAYWARD — One hundred eighty determined runners lined up at the starting line. With heavy cloud covering and 65 degree weather, the clock struck 7:30 a.m. and the 5th annual April Sorensen Half Marathon was under way. 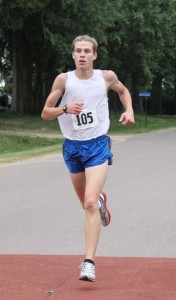 Benjamin Sathre, 22, of Chaska, wins the 5th annual April Sorensen Half Marathon with a time of 1:09:03. This was Sathre’s first year competing in the run.

The 13.1-mile foot race began in front of the Country Inn & Suites in Albert Lea and ended on Main Street in Hayward to kick off Hayward Days.

To the crowd’s surprise, it was not three-time winner Ben Merchant who crossed the finish line first. Instead, Benjamin Sathre, 22, of Chaska wowed fans by taking first-place with a time of 1 hour, 9 minutes and 3 seconds, the fastest the race has seen.

The July 7 race commemorated April Sorensen, an Albert Lea High School graduate, who was murdered in the upstairs of her Rochester apartment on April 17, 2007. Although her killer has never been found, her case is still at the forefront of not only the law enforcement’s minds, but her family and friends as well. Sorensen had a passion for sports, especially running, and her family believed that this was the best way to remember their loved one.

“We feel this is a great way to keep her memory alive,” said Josh Sorensen, April’s husband of four years at the time of her death.

Sorensen was at the finish line with medals for every finisher. He congratulated each runner with a big smile.

Runners included a wide age range and travelers from near and far. Some ran because the cause was close to their hearts. Jon Larson, April’s father, 56, has run all five years. Others came because of their shared passion with April — running.

“I like to support local events,” said Jeff Miller, an avid marathon runner and four-time participant in the half marathon. “The hometown course feeling is the best part.”

Miller came in fifth-place for the men and sixth overall. He was pleased with his time and thanks the weather for his results.

“It was an absolutely gorgeous day to run,” Miller said.

At 10 a.m., Sorensen thanked the crowd for making it out to the race, and awards were presented to the top three finishers in each gender division for the half marathon along with the top male, female, and co-ed relay teams.

“This was the biggest crowd we’ve had,” Sorensen said. “There’s just so much support and it’s wonderful.”

As long as people continue to come out and participate, Sorensen believes this half marathon will continue.

“We hope to keep doing this as long as possible,” Sorensen said.

To view a full list of participant finishes visit the Tribune’s website.To search by individual or for detailed statistics visit http://mtecresults.com/race/show/905.