Protector of the lake 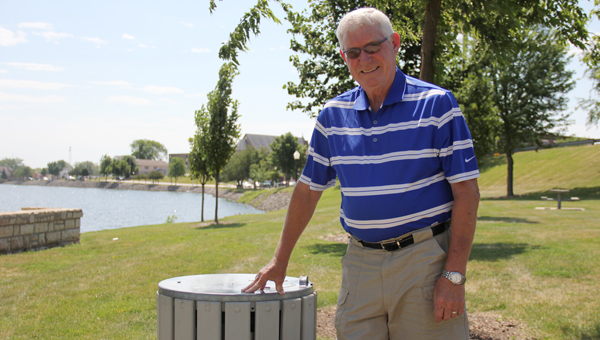 Albert Lean Bob Dickerman has taken it upon himself to pick up trash around Fountain Lake in an effort to keep the lake and city beautiful. -- Kelli Lageson/Albert Lea Tribune

For more than two months one Albert Lea resident has started picking up trash while walking around Fountain Lake, and he’s just hoping more people do the same to keep the city and lake beautiful.

Bob Dickerman said he’s been walking around the lake each morning for years, and finally the amount of trash he saw bothered him too much. He started bringing along plastic grocery bags to fill with trash he finds.

“I think this is the prettiest city in Minnesota,” Dickerman said. “We’re very lucky, and people take that for granted.”

Dickerman usually starts his walk around 5:15 or 5:30 a.m. and follows the paved route along Fountain Lake. On an average day he’ll fill his plastic bag seven or eight times, stopping along the way to empty it in trash bins along the route. The most he’s ever filled in a day is 13 bags.

“Once a week I’ll pick a stretch of shoreline, about 100 yards, and pick up what I find,” Dickerman said.

He finds mostly wrappers and drink containers and said half of what he picks up is trash with McDonald’s logos on it. He’s guessing that much of the trash comes from youngsters and has started learning more about that age group.

“Mountain Dew is the drink of choice — and energy drinks,” Dickerman said. “It’s amazing how many bottles, cigarettes and candy wrappers there are.”

Not only does he find trash along the sidewalks and grass, he regularly walks through parks and parking lots along the route. While he’s walking he listens to Pandora — an Internet radio station that predicts music you’ll like — on his iPhone. He said he listens to a variety of music, anything from music from the ’60s and ’70s to Elvis Presley or Garth Brooks.

And while he never meant to start any sort of trend, Dickerman said in the past three weeks he’s gotten some help from other regular lake-walkers. He’s seen other people picking up trash as they walk the popular trail.

“Some people have noticed me, and I get a lot of thank yous, which is nice,” Dickerman said.

But he’s not doing this for the recognition; he really just cares about the lake and the town. He said he can’t understand why people litter and said they must not realize that litter just goes directly into the lake.

There are limits to what he’ll clean up, and he said he doesn’t pick up cigarette butts. He’s also noticed much less dog waste around the trail since the city installed the dog waste stations along the route.

Dickerman does all this just a few hours each day and then goes to work in an office on Clark Street for Brand Source. He’s the president and north central region manager for the company that represents independent dealers of furniture, electronics and appliances so they can buy in bulk and compete with chain stores. Dickerman represents 54 businesses, and he’s passionate about buying and eating from locally owned stores and restaurants.

“I like the satisfaction of being able to mentor independent retailers so they’re able to compete profitably with the Sears, Best Buys, Lowe’s, Home Depots and Walmarts of the world,” Dickerman said.

In his free time Dickerman enjoys hunting, especially for elk, and fishing, especially for walleye and northern pike. He’s in Canada this week fishing. He and his wife, Anne, also have a second home in Sun City, Ariz., and like to visit their two daughters and three granddaughters in Colorado.

Livelihood: president and manager of the north central region for Brand Source

Interesting fact: Dickerman said his friends and family know him as a generous man, not only with money but time and resources.