Ronald LaVerne Sander, 71, of Bricelyn, died Friday, July 6, 2012, at St Marys Hospital in Rochester surrounded by his family. Funeral services will be at 11 a.m. Wednesday at the Bricelyn Lutheran Church in Bricelyn. Visitation will be from 4 to 8 p.m. Tuesday at the Bricelyn Lutheran Church and one hour prior to the service. The Rev. Luther Peterson will officiate and burial will be in the Bricelyn Cemetery in Seely Township. Bruss-Heitner Funeral Home in Bricelyn is in charge of arrangements. 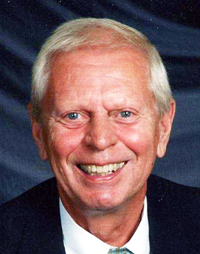 Ron graduated from Mankato State with a double major in economics and business administration. Ron was a bank examiner for the state of Minnesota and in February 1975 he and his family moved to Bricelyn. He was involved in all aspects of banking, having served as president of the State Bank of Bricelyn. Ron loved to garden, and was particular in caring for his lawn. He liked duck hunting, fishing with his family and friends. He dearly loved his children and grandchildren. He traveled many miles to watch his grandchildren in activities and sporting events. Sports and traveling to Arizona with his wife brought him great joy. After his retirement he enjoyed selling farm land for Heller Group 1 Stop Realty out of Olivia.

He was preceded in death by his parents and one sister Shirley Amundson.