2 semis turn over on freeways 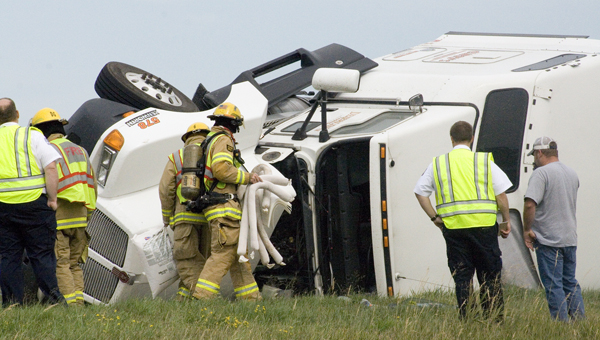 A Kenworth semi, listed to Deierling Trucking out of Iowa, rolled over in the northbound ramp of Exit 8 of Interstate 35 Wednesday morning. Emergency personnel responded to the scene in which diesel fuel leaked. No one was injured. -- Sarah Stultz/Albert Lea Tribune 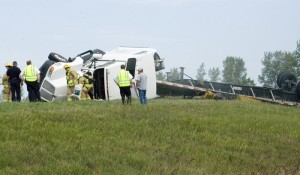 The flatbed trailer of this semi appears twisted after it rolled over Wednesday on the southbound ramp of Exit 8 of Interstate 35. -- Sarah Stultz/Albert Lea Tribune

The northbound ramp of Exit 8 from Interstate 35 onto U.S. Highway 65 in southern Albert Lea was closed from 10:40 a.m. to 2:40 p.m. Wednesday after a semi with a flatbed trailer reportedly lost control and tipped over.

The Minnesota State Patrol said the 2005 Kenworth semi was driven by Gary Deierling, 30, of Mount Pleasant, Iowa. It was listed to Deierling Trucking out of Iowa.

Extinguishers were used to douse a fire, and diesel fuel was reportedly leaking.

At 4:45 a.m. today, a 2004 Sterling Tractor reportedly rolled over on Interstate 90 a mile east of the Minnesota Highway 13 interchange.

According to the Minnesota State Patrol, the semi’s driver, Mason Otis, 42, of St. Paul, was transported to Mayo Clinic Health System in Albert Lea for injuries that were not life-threatening.

Why the semi rolled has not yet been released.

The Minnesota Department of Transportation said motorists could expect delays near the crash and stated that the left westbound lane of Interstate 90 was shut down.