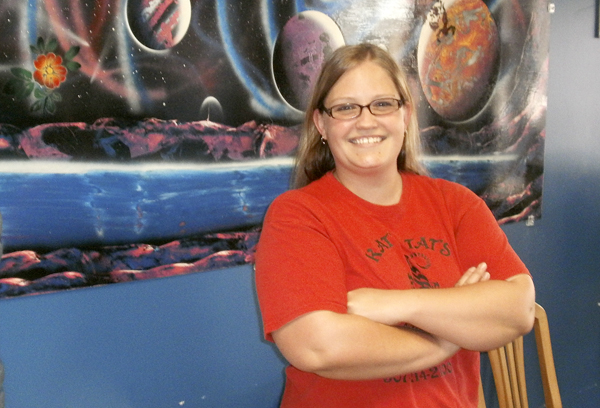 By Dean Anderson, for the Tribune

Her story wasn’t always the one she thought it would turn out to be. She is now the owner of Kat’s Tats, a tattoo shop in downtown Albert Lea. 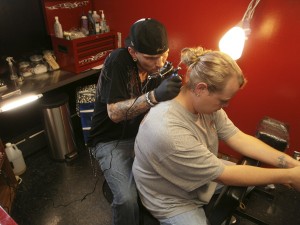 Bob Cremeans tattoos the neck of Crystal Wayner from Bricelyn.

“I never thought that I would become a tattoo artist,” she said. “I went to school for graphic design, but I started dating a guy who was a tattoo artist and offered to show me how. I actually did my apprenticeship under him in Albert Lea.”

When a tattoo shop in Owatonna that Bissell was working at had to close its doors, Bissell suddenly had an offer she couldn’t refuse.

She was offered a chance to take over the shop. It was a chance to be her own boss, and if it failed, she still could go back to working at other tattoo shops.

So far so good. Kat’s Tats is going well and an expansion to Albert Lea left Bissell looking for more people to hire. She now has six tattoo artists working for her in two cities. Five of those six are: Anson Eklund, Bob Cremeans, Jay Donovan, Jason Gregor, Jessica Raadt.

“We are a fully licensed shop, with certificates to prove it,” states the Kat’s Tats page on Facebook. “We exceed cleaning standards by the county and state along with additional training that is not required. We treat everyone with respect and try to give you the best piece of art possible.”

Tattoo artists always seem to have interesting tales. Take Cremeans, the manager of the Albert Lea store. He is a tattoo artist with more than 15 years under his belt. He never had an apprenticeship or went to school. He was self-taught.

“The summer before third grade, my mom was hosting a party. She was kind of a biker chick back then and a biker guy was giving a tattoo to another guy. I thought it was the coolest thing. So next year when we went back to school. You know how you say, ‘My name is,’ and what you want to be. I said, ‘My name’s Bob and I want to be a tattoo artist,’” Cremean said.

That was the start of Cremean’s dream to become a tattoo artist, but first he started to experiment with booze, drugs and tattoos at 16.

“I grew up in Blooming Prairie. It’s a small town with nothing to do. We would go over to friends and drink and hang out,” Cremean said.

“I thought I had life figured out.” Cremean said.

Cremean later moved to Florida and experimented with heroin. After living in Florida a few years Cremean moved back to Minnesota where methamphetamine became his drug of choice.

Cremean was soon arrested for selling methamphetamine to undercover cops. He was sentenced to prison, where he served 36 months, went through a boot camp, and served house arrest.

Over time Cremean decided it was time to turn his life around he filed for divorce, and started treatment.

After he was released, Cremean and Bisell started to exchange messages on Facebook.

“We grew up in the same town, and I was looking for a new artist,” Bissell said.

Soon Cremean took the job and started working at Kat’s Tats. Later he was promoted to manager of the new store.

For the next chapter in his life Cremean is going to focus on his career and raising his daughter while becoming a part of the community once again.