The bittern’s call has earned it many nicknames 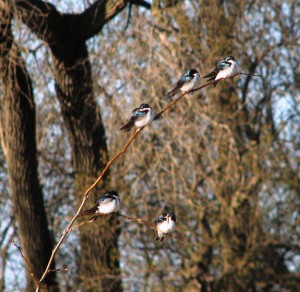 Larry Forster of Hollandale took this photo of tree swallows.

“Everything is nearly copacetic. I replaced the windows on my house. The old ones were letting in too much dark. It’s hot, the flies and mosquitoes are hungry, but any day that’s not in winter is a great one.”

“Ogden Nash wrote, ‘God in his wisdom made the fly and then forgot to tell us why.’” I interject.

“Riveting. My refrigerator loses its cool in hot weather. It’s a temperamental contraption. I called a repairman. He told me the bad news was that it’s going to cost a lot more than I thought to fix it. The good news was that he wouldn’t be able to fix it. No matter how hot it gets, I spend the day outside. Yesterday was a scorcher, but I got off my hammock only a few times to get more lemonade. When I stopped at the post office, it was 99 degrees. There was a sign in front of it saying that it was 10-minute parking only. That was goofy, but a parking rule is a parking rule. Never let it be said that I don’t abide by the rules. It took me only two minutes in the post office. I had to sit in that car parked in the hot sun the remaining eight minutes.”

I wasn’t bittern about it

I did a radio show via a cellphone as I stood on a seldom-traveled gravel road running alongside a cattail marsh in North Dakota. An American bittern sang all the while I did that program. It didn’t bother me. I welcomed its call. An American bittern stands motionless with its bill pointed towards the sky. Its plumage provides a camouflage in the marshes. The bittern stalks the fringes of shallow wetlands searching for prey. It eats most any creature of a suitable size, including crayfish, dragonflies, fish, frogs, grasshoppers, snakes, water bugs and small mammals such as voles. This bittern’s distinctive call has earned it a flock of nicknames, including, barrel-maker, belcher squelcher, bog-bull, bog-hen, bog-trotter, butter bump, dunk-a-doo, mire-drum, night-hen, plum puddin’, post-driver, slough pumper (slough pump), stake-driver, sun-gazer, thunder-pumper and water-belcher.

Michael Bonner of Courtland writes, “A whip-poor-will called all night long, from sundown to sun up. Why do they do that?” Whip-poor-wills are most active at night. They forage at dusk, dawn and in moonlight. They catch flying insects, particularly moths and beetles. During the breeding season, a whip-poor-will male calls its name repeatedly, especially on moonlit nights. A calling bout can be a marathon and it carries well. They call from the ground or exposed perches. The call is used to attract a mate and to defend territory. Somehow, it makes us lonely and has become a symbol for melancholy. The famous country singer Hank Williams mentioned the whip-poor-will in his song, “I’m So Lonesome I Could Cry.” “Hear that lonesome whip-poor-will. He sounds too blue to fly. The midnight train is whining low. I’m so lonesome I could cry.” I’m happy to hear them, but don’t hear as many as I once did. I see fewer of the large moths they feed upon, too.

“How many mosquito species are there in Minnesota?” An estimated 51 species with about 28 of them biting humans. I’ve heard that mosquitoes are attracted to “sweet blood.” It’s more likely sweet scents. It’s wise to wear light-colored and loose-fitting clothing to avoid bites. The best way to avoid mosquitoes is by carrying a big stick — at 50 mph.

Tom Jessen of Madelia writes, “Heard the first cicadas in Madelia on June 24. I don’t think I’ve ever heard them calling in June before. I’ve heard a German old wives’ tale that says that the first frost comes six weeks after the first cicadas are heard. This means we’re in trouble or it was that way in the Black Forest during the mini ice age.” A late friend from Faribault named Orwin Rustad was a phenologist of the first order. The earliest calling cicada he recorded was on June 7 and the latest date he first heard a cicada was July 12. The average date was July 5.

Brad Spooner of Hartland had a skunk charge him and asked if that was normal behavior or indicative of a rabid animal. Treat any aggressive animal with caution. Skunks have the ability to defend themselves by spraying a repellent liquid from their anal glands. Because of this, they have no natural predators other than the great horned owl. When meeting what it deems a threat, the striped skunk faces the threat and stamps its front feet. If this doesn’t discourage the other, it sometimes charges a few paces before retreating. If it continues to be threatened, it turns its rear with tail raised toward the threat and sprays. If a spotted skunk (civet cat), which is rare here, feels threatened, it does a handstand on its forefeet with hind legs and tail in the air. It can spray from that position.

“When my birds are on the lawn feeding, a hawk dives down, grabs one and is gone instantly. Anything I can do before I run out of birds?” That’s a tough question. The hawk (likely a Cooper’s hawk, possibly a sharp-shinned hawk in some areas) has a family to feed and they’re a ravenous bunch. It’s part of nature. That said, I hate to lose a cardinal in my yard to a hawk or anything else. You could stop feeding birds (especially on the ground) for a week or two. Over time, you could provide dense shrubbery and trees for shelter. Adding brush piles could help. It’s a bird-eat-bird world.

“Happiness is like a butterfly which, when pursued, is always beyond our grasp, but, if you will sit down quietly, may alight upon you.” — Nathaniel Hawthorne

“One of the secrets of a long and fruitful life is to forgive everybody, everything, every night before you go to bed.” — Bernard M. Baruch