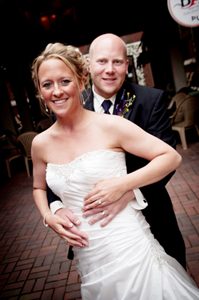 Parents of the bride are Merl and Rose Linder of Albert Lea. Grandparents are Elmer and Elvira Young of Freeborn and the late Max and Lela Linder of Platteville, Wis.

Parents of the groom are Steve and Theresa Coady of Holmen, Wis. Grandparents are George and Mary Schrabeck of La Crosse, Wis., the late Arthur Coady and Faye Flattum Coady of La Crosse and the late Harland Sheehan of La Crosse.

Maid of honor was Kirstin Aker, friend of the bride, of Rockford. Bridesmaids were Katie Coady, sister of the groom, of Onalaska, Wis., and Melissa Young, cousin of the bride, of Leonia, N.J.

Flower girl was Jessanya Rybold, friend of the groom, of Mindoro, Wis.

Ring bearer was Benton Goergen, friend of the bride, of Bloomington.

A reception was held at Boot Hill Pub in La Crosse, Wis.

The bride is employed at Dairyland Power Cooperative.

The groom is employed at Marble Shop Inc.

After a wedding trip to Asheville, N.C., and Niagara Falls, N.Y., the couple resides in La Crosse, Wis.