Carissa Swartwoudt and Matthew Levorson were united in marriage on Feb. 25, 2012, at the Chapel of the Good Shepherd in Faribault. The Rev. Wayne Halvorson of Our Savior’s Lutheran Church in Albert Lea performed the double-ring ceremony.

Parents of the bride are Brett and Jacqueline of Faribault.

Parents of the groom are Ron and Gail Levorson of Albert Lea. 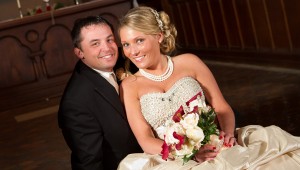 Ushers were James Kubes of Lonsdale, Kyle Kubes of Lonesdale and Brandon Wroe of Farmington, all cousins of the bride.

Musician and soloist was David Baird of Lakeville.

A dinner and dance reception followed the ceremony at the Vintage Ballroom in Faribault. Host couple was James and Lori Kubes of Lonsdale.

Carissa is a 2004 graduate of Faribault Senior High School and a 2008 graduate of the College of St. Catherine with a Bachelor of Science in nursing. She is employed by Mayo Clinic Health System in Albert Lea and Rice County District One Hospital in Faribault. She is a registered nurse in labor and delivery.

Matt is a 2000 graduate of Albert Lea High School and a 2004 graduate of Bethany Lutheran College with a Bachelor of Arts degree in communications. Matt is the owner of Matt Levorson Productions. He is also employed by the Freeborn County Sheriff’s Office as the water patrol for Freeborn County.

After a 10-day honeymoon to Playa Del Carmen, Mexico, the couple resides in Albert Lea.